Geladas are a species of old world monkey.

They are sometimes called “gelada baboons” or “bleeding-heart monkeys” for the characteristic red patch of skin on their chests.

Geladas are not actually true baboons, although they look very similar.

They are in fact the only member of their genus (Theropithecus) and the last surviving species of aonce widespread group of grass-grazing primates.

Theropithecus is derived from the Greek root words for “beast-ape.”

Geladas are found only in the Ethiopian Highlands, with large populations in the Semien Mountains. 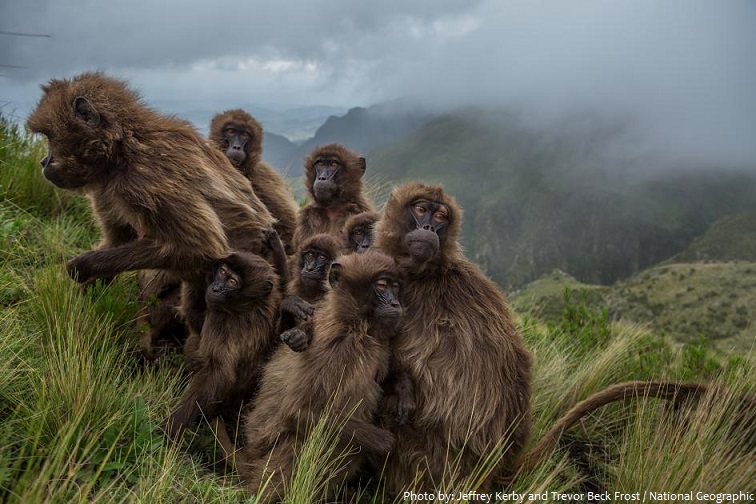 They live in elevations 1,800–4,400 meters (5,900-14,450 feet) above sea level, using the cliffs for sleeping and climb up to the plateaus for their daily grazing and social activities.

The lifespan is about 15 years in the wild and up to 30 years in captivity.

Both have dense, brownish to buff fur on the back and head, with lighter fur on the chest and belly, and dark colored faces (with pale eyelids) and extremities. Males have a long cape of hair on the back. 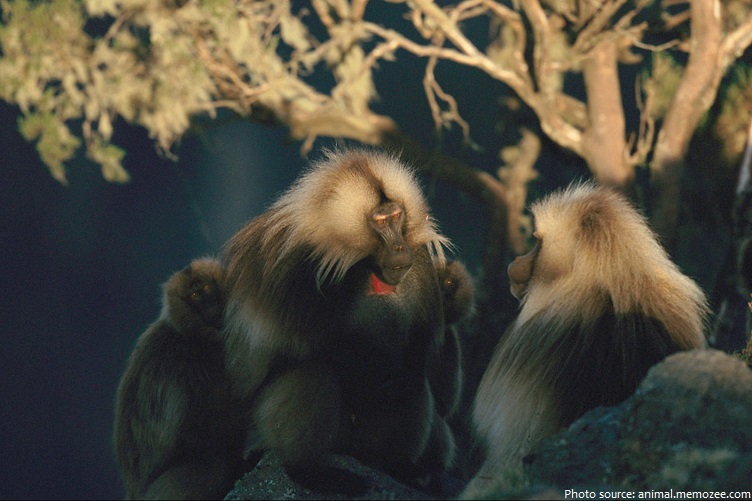 Its arms and feet are nearly black. Its short tail ends in a tuft of hair.

The gelada’s most striking feature is the hairless, hourglass-shaped pink or red area of skin located on the chest. On males, it is bright red and surrounded by white hair; on females, it is far less pronounced.

Geladas are primarily diurnal. At night, they sleep on the ledges of cliffs. At sunrise, they leave the cliffs and travel to the tops of the plateaux to feed and socialize. 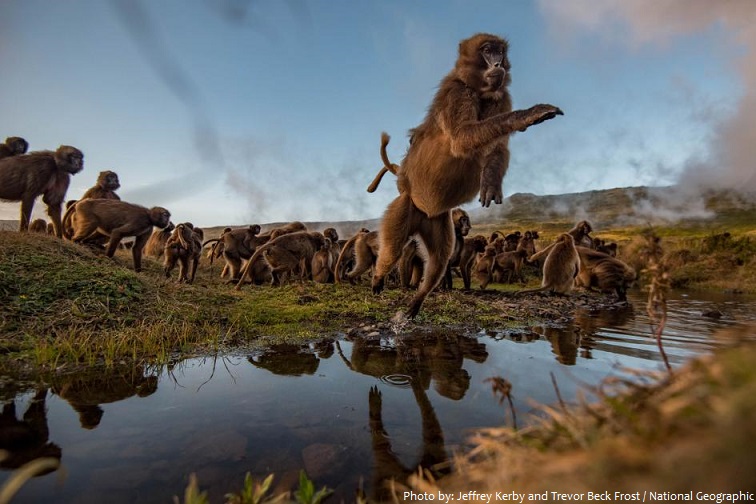 Geladas are the world’s most terrestrial primates, except for humans.

Geladas are the only primates that are primarily graminivores and grazers – grass blades make up to 90% of their diet. They eat both the blades and the seeds of grasses. When both blades and seeds are available, geladas prefer the seeds. The rest of their diet is made up of flowers, rhizomes and roots, herbs, other plants, fruits and the occasional insect. 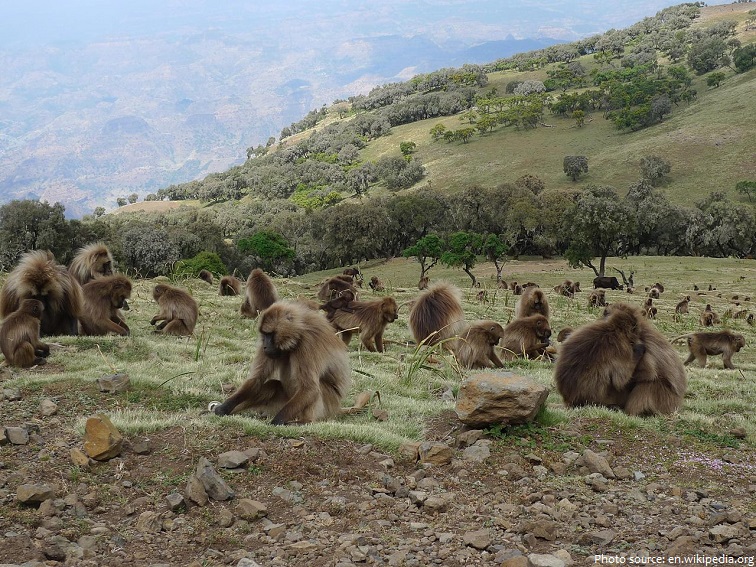 This monkey is well adapted to its grazing feeding niche, with highly opposable thumbs and finely tuned index fingers for plucking grass, and a reinforced rear end ideal for scooting over the grass.

Geladas spend their days eating and socializing, like many other primates. Grooming, playing, and exercising their peculiar bipedal “shuffle gait” as they eat are paramount to gelada life. 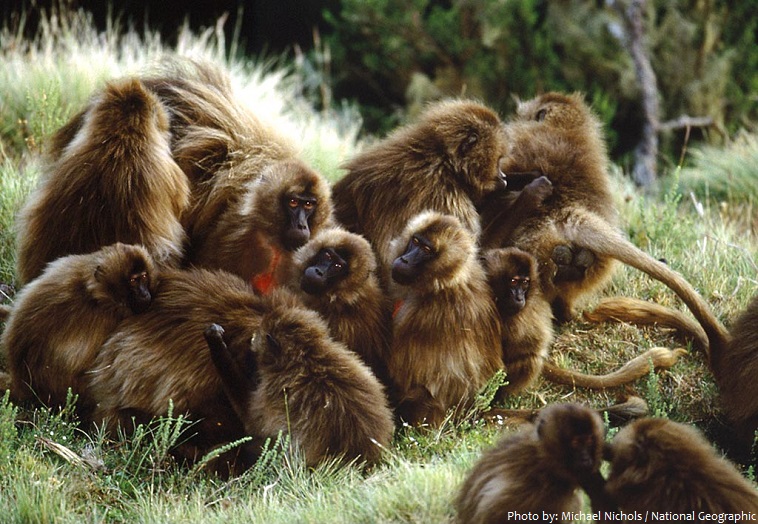 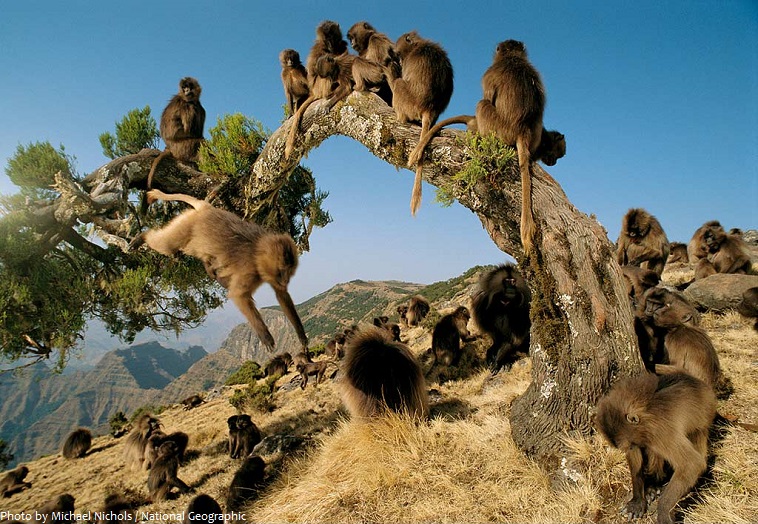 Geladas have a diverse repertoire of over 30 different vocalizations — typical of highly social animals. Vocalizations can be combined into sequences to address necessary contact, reassurance, appeasement, solicitation, ambivalence, and aggressive-defensive communications. Some calls are restricted to certain higher-status animals.

Geladas communicate through gestures, as well. They display threats by flipping their upper lips back on their nostrils to display their teeth and gums, and by pulling back their scalps to display the pale eyelids. 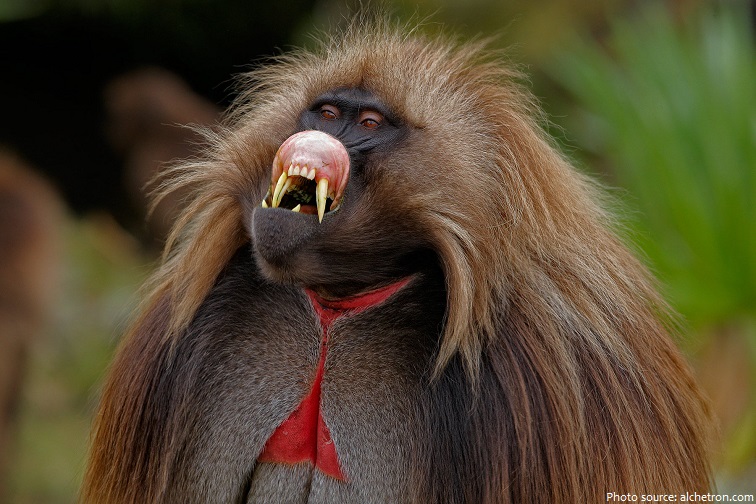 Breeding and reproduction can occur at any time of the year.

After a gestation period of 5 to 6 months a female give birth to one baby (twins are rare).

Youngsters are usually born at night. They have red faces, black hair, and closed eyes. New mothers stay on the periphery of the group, as other females take a keen interest in her baby and may even try to abscond with it. The infant is carried on its mother’s belly for the first five weeks, and after that rides on her back. They can move independently at around five months old. 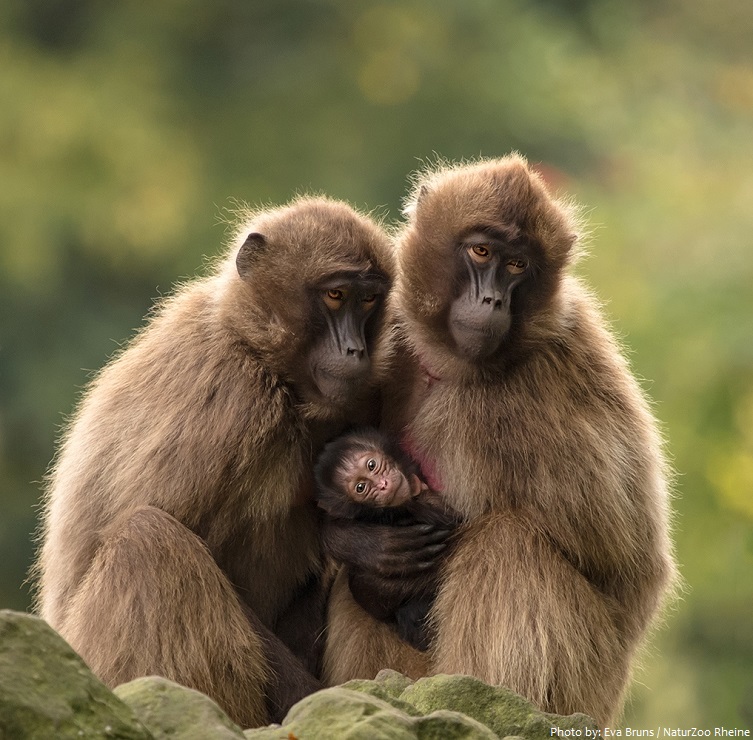 The usual response to predators is to flee to cliff faces, but in some circumstances, males may confront a threat and have even been observed to confront dogs and even mob and surround a leopard.

Due to the proximity of humans to many habitats, predator pressure is probably pretty low for the gelada.

Major threats to the gelada are a reduction of their range as a result of agricultural expansion and shooting as crop pests.

They are the smallest vestige of genus Theropithecus that millions of years ago stretched from South Africa to Spain and into India, and there is no other animal like them.