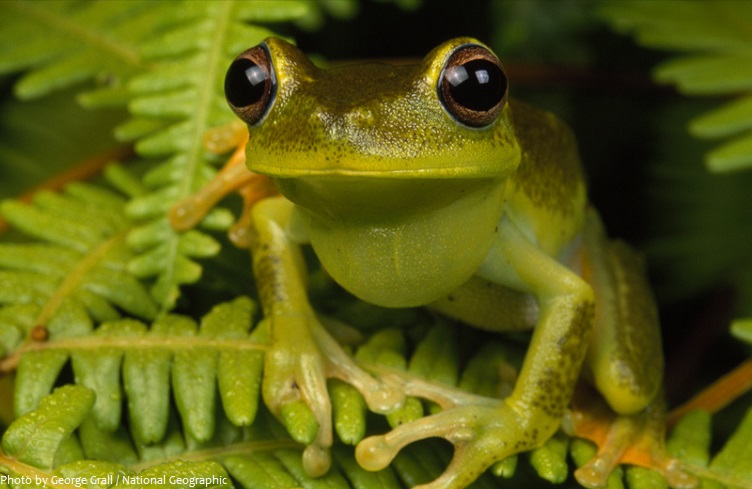 Frogs belong to a group of animals called amphibians.

They are known for their jumping abilities, croaking sounds, bulging eyes and slimy skin.

There are approximately 4,800 species of frogs around the entire world.

Frogs live on every continent except Antarctica.

Frogs typically live in forested and wetland areas. They live in water, within ground cover, in trees and sometimes in grasslands as well as deserts.

The lifespan of a frog is 1 to 30 years. The exact length of time depends on the species of frog.

Frogs come in many sizes and colors.

The goliath frog (Conraua goliath) is the largest living frog on Earth. Specimens can grow up to 32 centimeters (12.6 inches) in length from snout to vent, and weigh up to 3.25 kilogram (7.17 pounds). 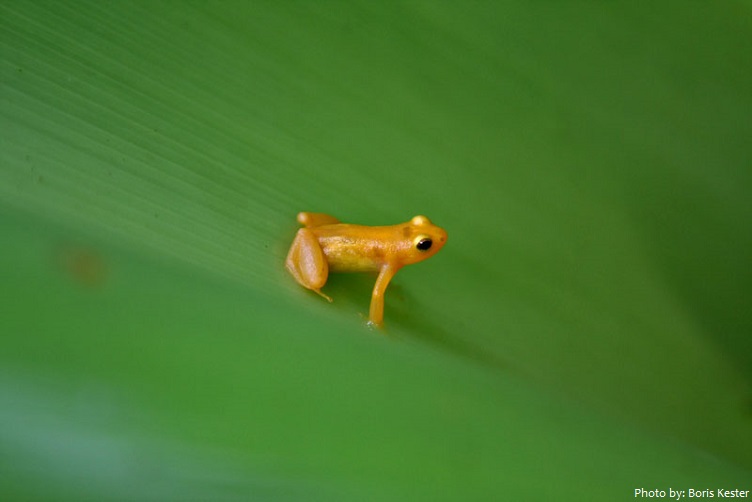 Adult frogs have two main color schemes. Each one signals a different survival technique. Those with bright colors (like poison frogs) advertise their presence and warn potential predators that their skin is toxic. Those with mottled green or brown colors are camouflaged so predators have a hard time finding them.

Most species of frogs are nocturnal, but many others are diurnal.

Frogs are solitary animals, though they aren’t particularly territorial, except during the breeding season. 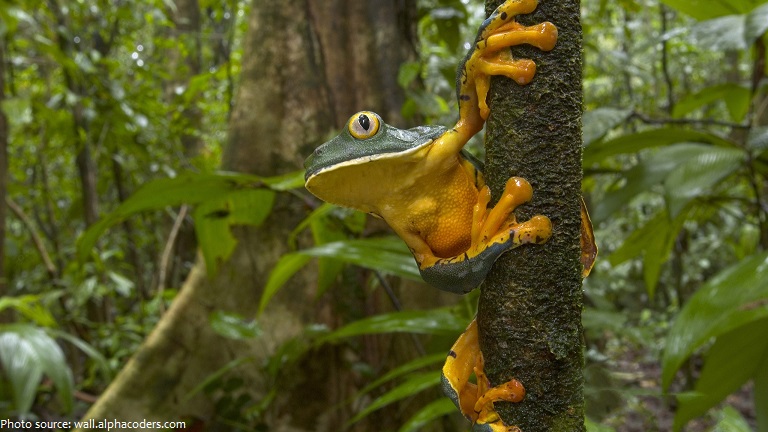 Frogs have a moist and permeable skin layer covered with mucous glands; this allows them to breathe through their skin in addition to their lungs. The moisture on the skin dissolves oxygen from the air and water surrounding the frog and transmits it into the blood.

During the time they stay submerged under water or buried in soil (such as during hibernation) they ONLY breathe through their skin.

Frog skin is water permiable, this means it can let water in and out. Frogs don’t often drink with their mouths, they absorb water through their skin. They have a ‘seat pouch’, an area on their bellies which is designed for water absorbtion. They absorb through capillary action from water or a moist surface.

Frogs are carnivores that eat live prey and do not feed on plants or carrion. Small to medium sized frogs eat insects such as flies, mosquitoes, moths and dragonflies. Larger frogs will eat larger insects like grasshoppers and worms. Some large frogs will even eat small snakes, mice, baby turtles, small fish, and even other smaller frogs! 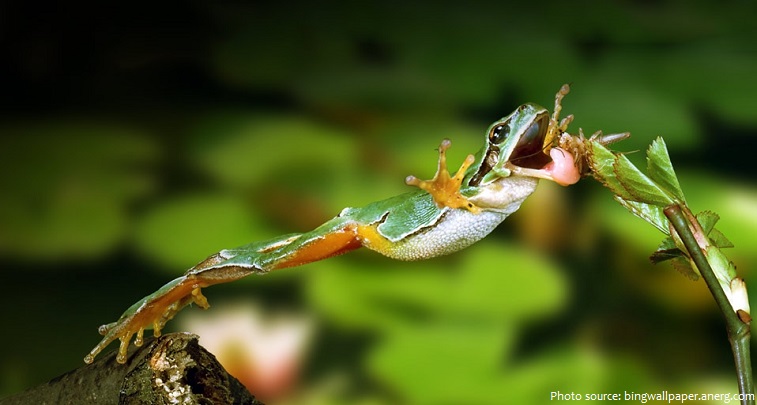 Frogs use their sticky, muscular tongue to catch and swallow food. Unlike humans, their tongue is not attached to the back of its mouth. Instead it is attached to the front, enabling the frog to stick its tongue out much further.

Most frogs don’t hunt, but wait for their prey to come close enough for them to attack; They can’t chew their food and must swallow it whole.

Because they are cold-blooded, they don’t need to feed very often to support their metabolism.

During extreme conditions, some frogs enter a state of torpor (state of decreased physiological activity) and remain inactive for months. In colder regions, many species of frog hibernate in winter.

Some kinds of frogs can jump distances up to 20 times their own body length in a single leap. When disturbed, frogs often jump into a puddle or pond where they can hide underwater. Their erratic zig-zag jumping on land also serves to confuse potential predators. 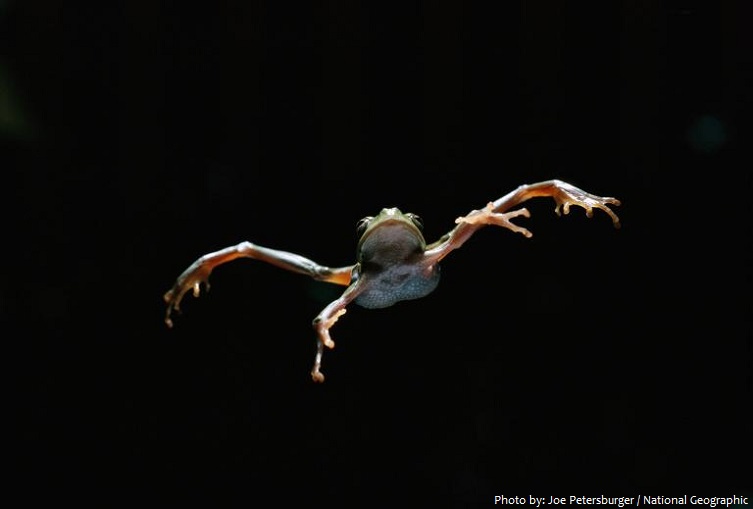 Frogs can see forwards, sideways and upwards all at the same time. They never close their eyes, even when they sleep. Frogs do, however, have eyelids that blink to protect their eyes from dirty residue and preserve moisture.

Remarkably, frogs actually use their eyes to help them swallow food. When swallowing a big mouthful of food, a frog blinks its eyes. The blinking pushes the frogs huge eyeballs down on top of its mouth. This helps squeeze the food in its mouth into its throat.

Frog ears are called tympanums and look more like a flat, disc-shaped patch of skin directly adjacent to each eye.

In most frog species only the males croak. They croak to attract female frogs for breeding, and to warn away other male frogs from their territory. Many kinds of frogs puff themselves up enormously with air when they croak. 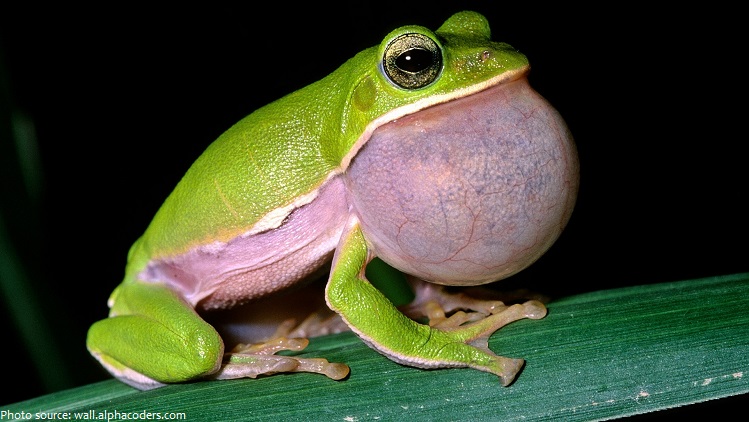 Frogs become mature between two months to 3 years old. After a female frog becomes mature, she can lay from two to more than 50,000 eggs at once, depending of species. Eggs will incubate for 48 hours to 23 days, submerged in water. During incubation, the male frog typically protects the eggs.

Once an egg hatches, a small, legless, fish-like creature emerges. This frog offspring is called a tadpole. Tadpoles gradually grow legs, absorb their tails, lose their gills, and turn into frogs and toads that start breathing air and hopping. This whole transformation is called metamorphosis. 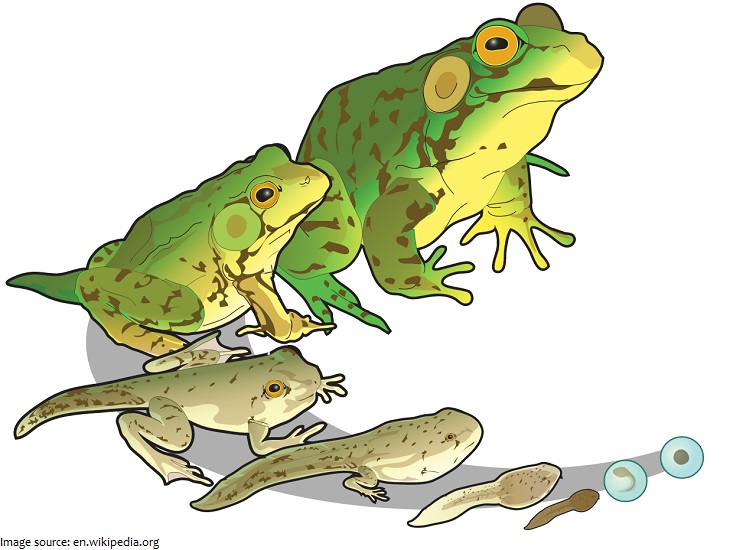 African frogs are the best jumpers of the frog world. They can hop 4.2 meters (14 feet) in a single bound.

Frog legs are eaten by humans in many parts of the world. French cuisses de grenouille or frog legs dish is a traditional dish particularly served in the region of the Dombes (département of Ain). 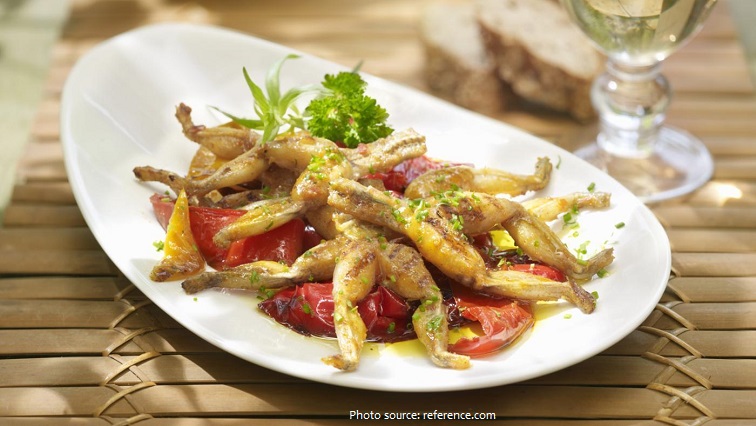 In Egypt the frog is the symbol of life and fertility, and in Egyptian mythology Heget is a frog-goddess who represents fertility.

The Greeks and Romans associated frogs with fertility and harmony, and with licentiousness in association with Aphrodite.

In medieval Europe the frog was a symbol of the devil, as the Catholic church associated it with witchcraft as a familiar spirit.

Frogs feature prominently in folklore, fairy tales, and popular culture. They tend to be portrayed as benign, ugly, and clumsy, but with hidden talents. Examples include Michigan J. Frog, “The Frog Prince”, and Kermit the Frog. 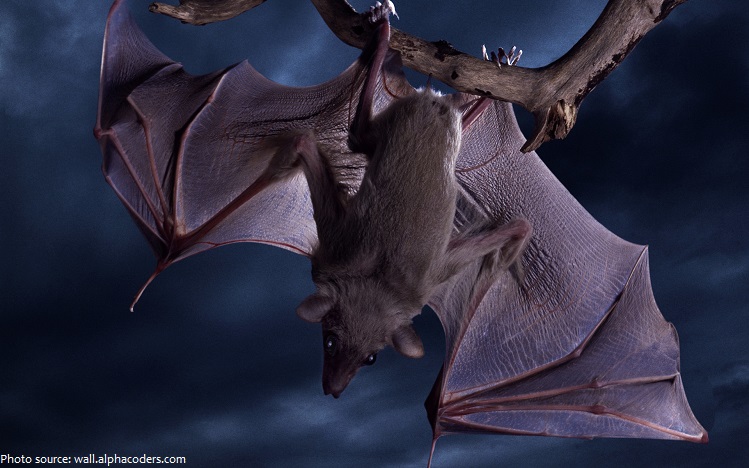 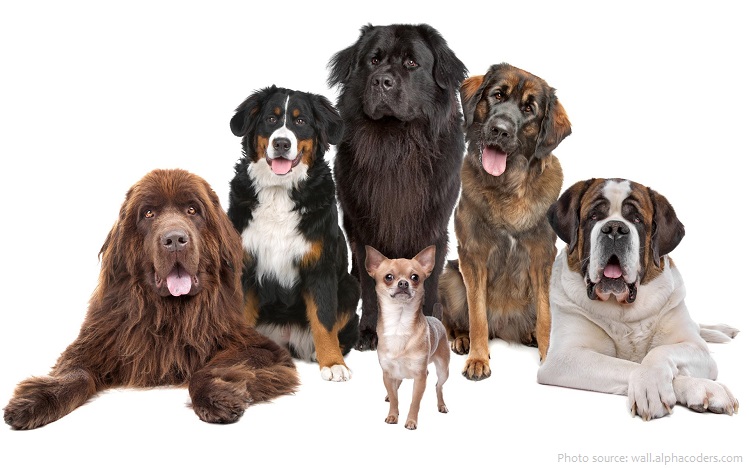 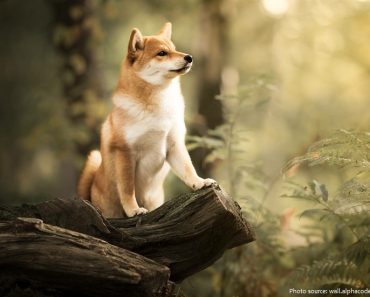 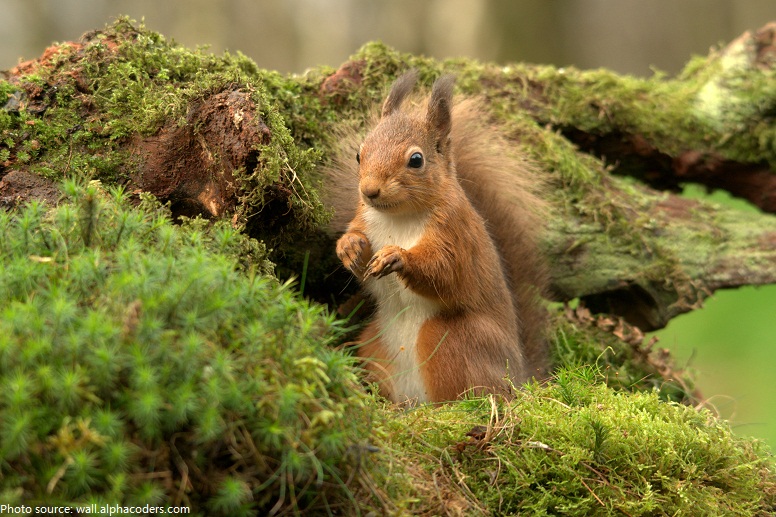 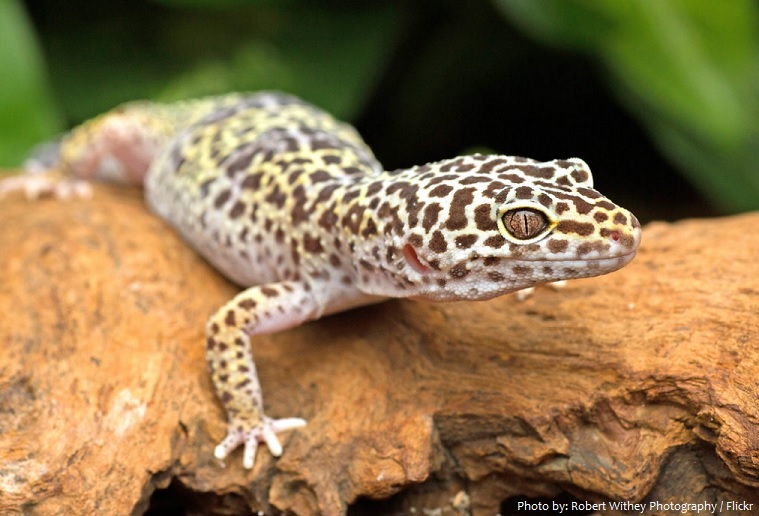