Colorado is a western state in the Rocky Mountains region of the United States.

Colorado is the 8th largest state in the United States in terms of total area with 269,837 square kilometers (104,094 square miles).

Denver is the capital and most populous city of Colorado. Denver is nicknamed the Mile High City because its official elevation is exactly one mile (1,609 meters or 5,280 feet) above sea level, making it the highest major city in the United States. 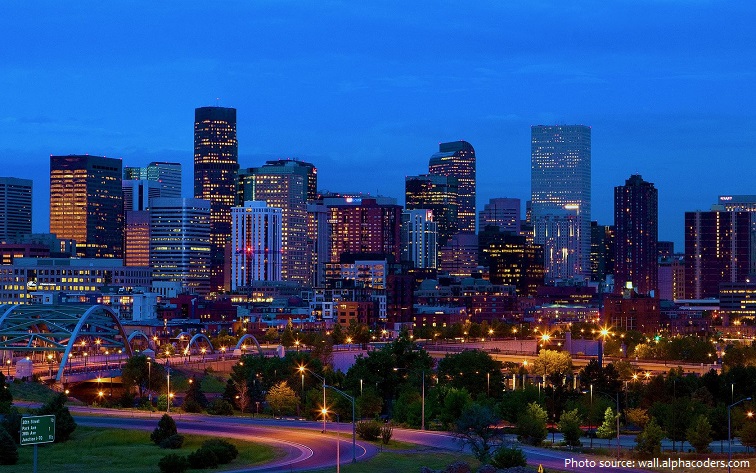 Located at the heart of the Rocky Mountains, the average elevation in Colorado (2,076 feet or 6,811 feet) is the highest of any U.S. State.

The summit of Mount Elbert at 4,401 meters (14,440 feet) elevation in Lake County is the state’s highest point and the highest point in the Rocky Mountains of North America. 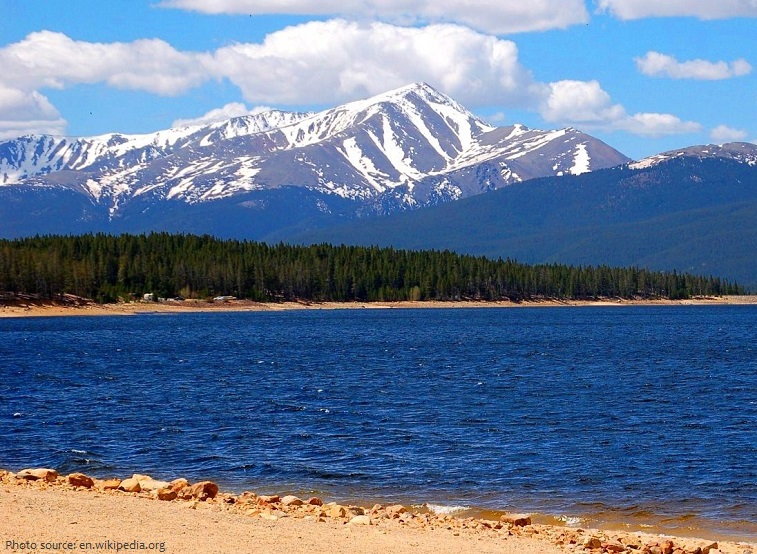 The state’s lowest elevation is 1,011 meters (3,317 feet) at the point on the eastern boundary of Yuma County where the Arikaree River flows into the state of Kansas. This point, which holds the distinction of being the highest low elevation point of any state, is higher than the high elevation points of 18 states and the District of Columbia.

A little less than one half of the area of Colorado is flat and rolling land.

In the western regions of the state the Colorado Plateau covers the land; a region of high plateaus and deep, rugged canyons, formed over hundreds of centuries by the meandering waters of the Colorado River, and numerous smaller rivers. 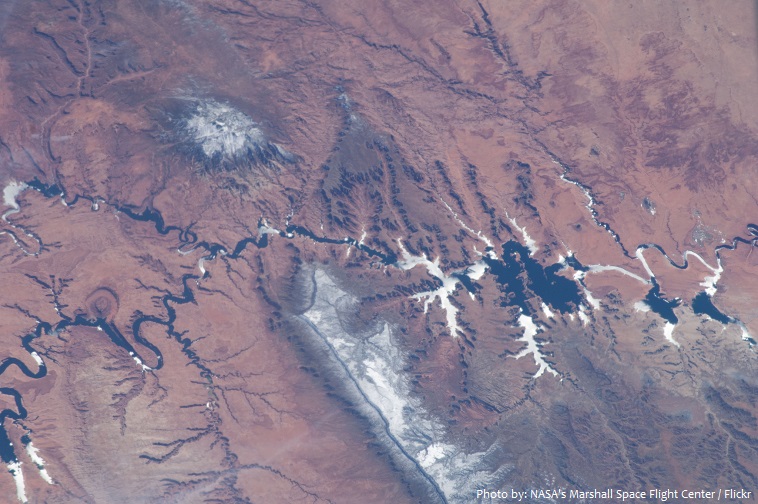 Rocky Mountain National Park is one of the most popular national parks in the United States, greeting about 4.5 million annual visitors with rugged postcard-perfect peaks, lakes and trails. The park contains 150 lakes and 450 miles of streams, plus ecosystems ranging from wetlands to pine forests to montane areas to alpine tundra. 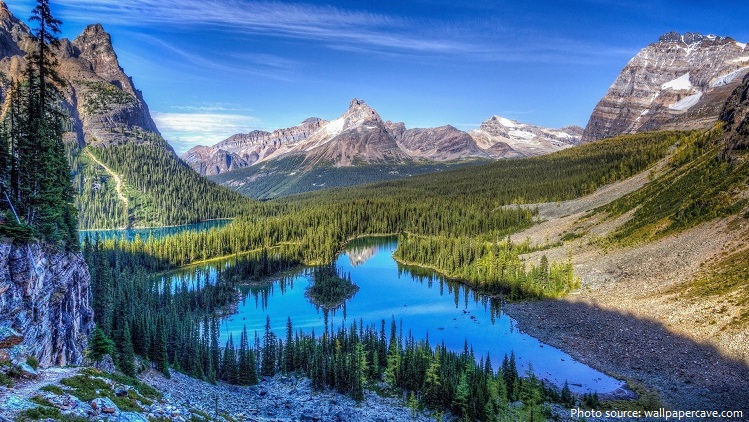 Mesa Verde National Park is a National Park and World Heritage Site located in Montezuma County. It protects some of the best preserved Ancestral Puebloan archaeological sites in the United States. With more than 4,300 sites, including 600 cliff dwellings, it is the largest archaeological preserve in the U.S. Mesa Verde (Spanish for “green table”) is best known for structures such as Cliff Palace, thought to be the largest cliff dwelling in North America. 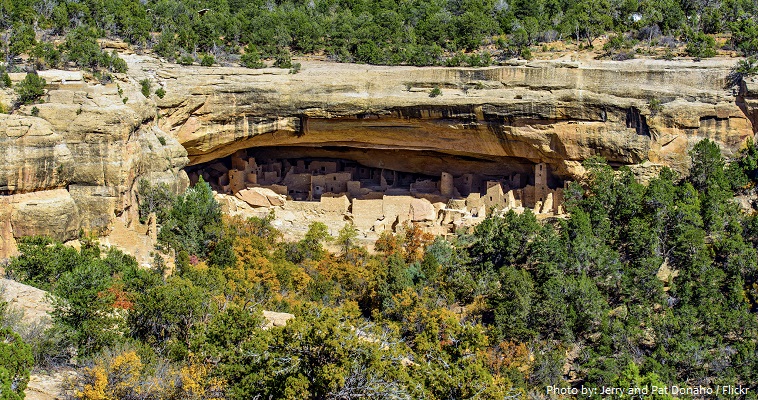 Garden of the Gods, a registered National Natural Landmark, is a unique landscape of jagged stone towers and fins jutting up 90 meters (300 feet) from the earth, and giant balanced boulders and rock piles dotting the landscape, with distant mountains completing the scene. Fifteen miles of trails, most of which are short and easy, allow you to get up close to the dramatic rock formations and wander through the surreal scenery.

The Grand Mesa is a large mesa in western Colorado in the United States. It is the largest flat-topped mountain in the world. It has an area of about 1,300 square kilometers (500 square miles) and stretches for about 40 miles (64 km) east of Grand Junction between the Colorado River and the Gunnison River, its tributary to the south. 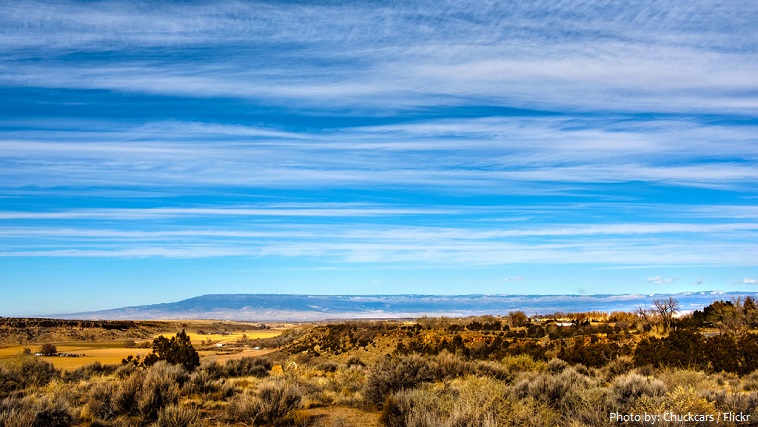 The Durango & Silverton Narrow Gauge Railroad (D&SNG) is a 91.4 cm (3 feet) narrow-gauge heritage railroad that operates 72.7 km (45.2 miles) of track between Durango and Silverton, in the U.S. state of Colorado. The railway is a federally designated National Historic Landmark and is also designated by the American Society of Civil Engineers as a Historic Civil Engineering Landmark. 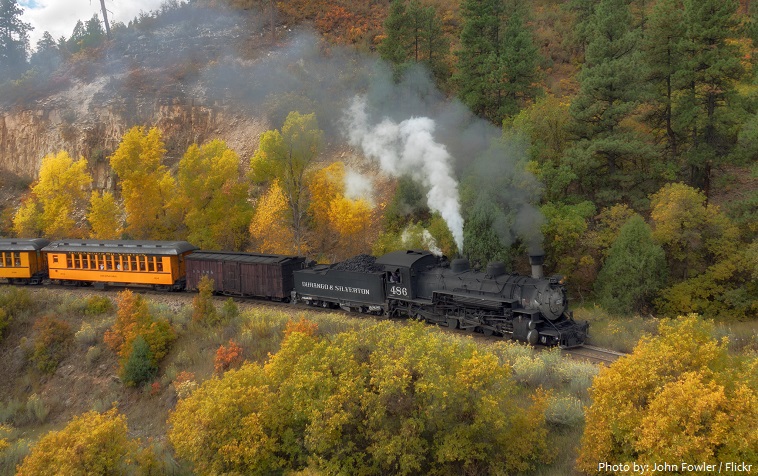 The Broadmoor Pikes Peak Cog Railway is an Abt rack system cog railway with 14,35 cm (4 ft 8 1⁄2 in) standard gauge track in Colorado, climbing the well-known mountain Pikes Peak. The railway is the highest in North America by a considerable margin. It was built and is operated solely for the tourist trade. 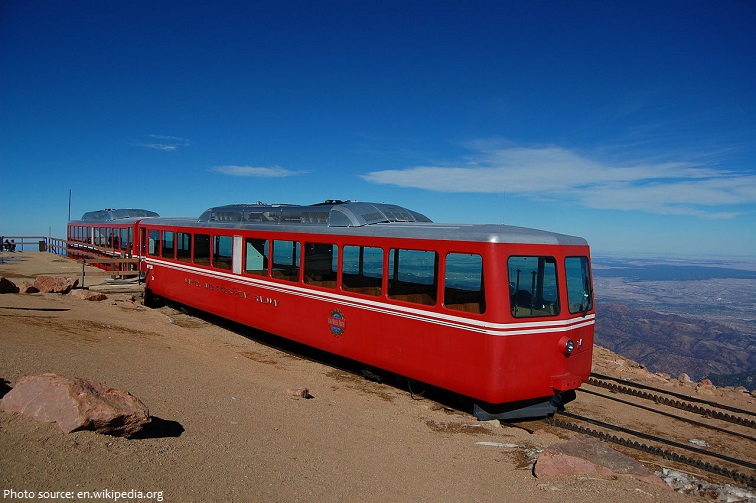 The human history of Colorado extends back more than 13,000 years. The region that is today the state of Colorado was first inhabited by American Indians.

First explored by Europeans in the late 1500s, the area was ceded to the United States in 1848 with the Treaty of Guadalupe Hidalgo that ended the Mexican-American War (1846-48).

During the Plains Indian Wars (1860s-80s), Colorado’s wild frontier was the scene of intense fighting between Native Americans and white settlers.

On August 1, 1876, U.S. President Ulysses S. Grant signed a proclamation admitting Colorado to the Union as the 38th state. 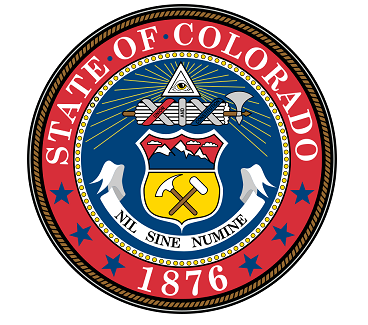 The word Colorado means “colored red” in Spanish and was first applied to the Colorado River.

Colorado is nicknamed the “Centennial State” because it became a state a century after the signing of the United States Declaration of Independence.

During World War II, a special unit of the army trained in Colorado to prepare for combat in high, snowy altitudes. Many of these soldiers later returned and founded famous ski resorts like Aspen and Vail.

Colorado is the only U.S. state that’s ever turned down a chance to host Olympics. Denver originally won the bid for the 1976 Winter Olympics, but the state’s voters later rejected it because of the cost, pollution and population boom it would have on the State Of Colorado, and the City of Denver. Innsbruck, Austria ended up hosting the Winter Olympics in 1976. 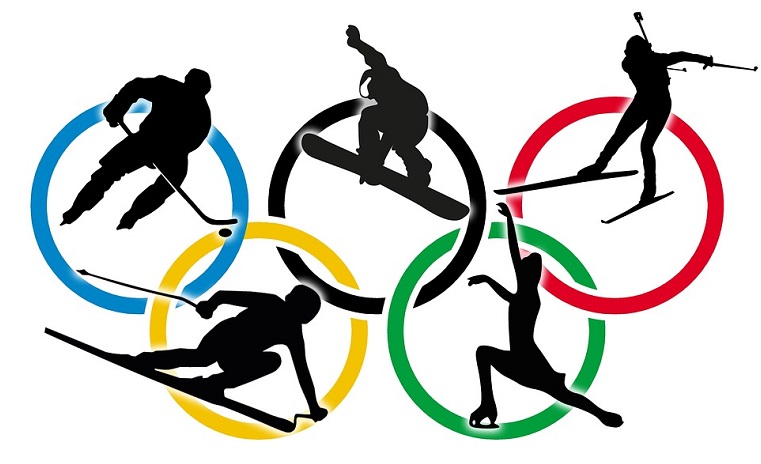 Having a snowball fight is illegal in Aspen, Colorado, because the act is a violation of a local anti-missile law.

Leadville is the highest incorporated city in North America with its elevation at (3,179 meters) 10,430 feet, and grew exponentially in population in 1877 when the rush for silver began.

Denver has the largest city park system in the nation with 205 parks in city limits and 8,090 hectares (20,000 acres) of parks in the nearby mountains.

The tallest sand dune in America is in Great Sand Dunes National Park and Preserve. The dune is rising to a maximum height of 229 meters (750 feet) from the floor.

Glenwood Springs in Colorado, has the world’s largest natural hot springs swimming pool with a flow rate of 143 liters/second.

Colorado has more microbreweries per capita than any other state.

Residents of the state are known as Coloradans, although the term “Coloradoan” has been used archaically and lives on in the title of the Fort Collins Coloradoan newspaper.

A number of film productions have shot on location in Colorado, especially prominent Westerns like True Grit, The Searchers, and Butch Cassidy and the Sundance Kid.