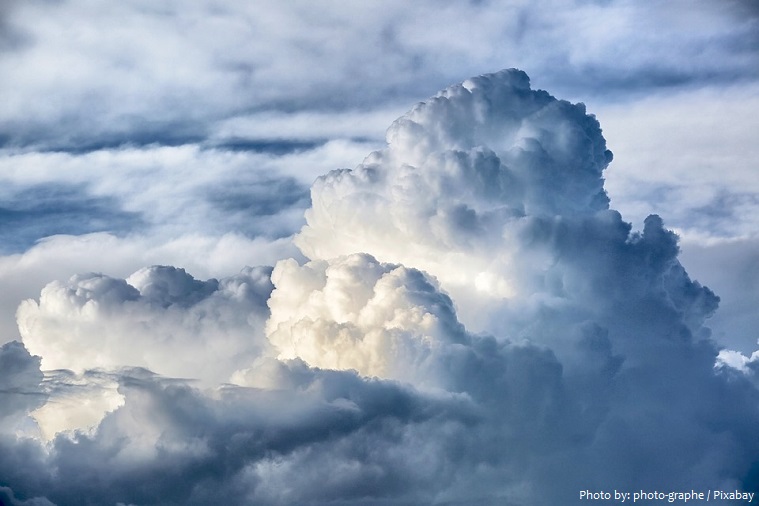 A cloud is a visible mass of liquid droplets, frozen crystals suspended in the atmosphere above the surface of the Earth or other planetary body, such as a moon.

On Earth, clouds are formed as a result of saturation of the air when it is cooled to its dew point, or when it gains sufficient moisture (usually in the form of water vapor) from an adjacent source
to raise the dew point to the ambient temperature.

Clouds play an important part in the water cycle. As evaporation occurs from the surface of oceans, lakes, rivers, and other exposed bodies of water, the vapor becomes part of the atmosphere and later condenses to form small droplets or ice crystals. When surrounded by billions of other droplets or crystals, they become visible as clouds. Eventually, the water precipitates in the form of rain, snow, and so forth, nourishing the Earth and replenishing the stores of freshwater on land. 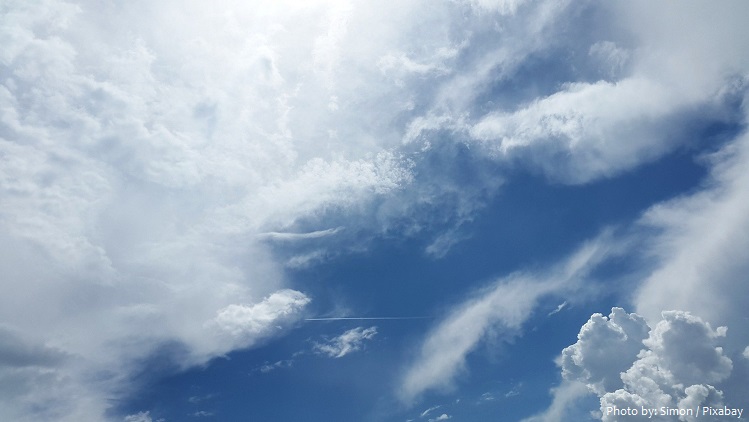 In addition, clouds regulate the Earth’s climate, based on the amount of radiation they reflect and absorb from the Sun and the Earth.

Ancient cloud studies were not made in isolation, but were observed in combination with other weather elements and even other natural sciences. Around 340 BC, Greek philosopher Aristotle wrote Meteorologica, a work which represented the sum of knowledge of the time about natural science, including weather and climate.

After centuries of speculative theories about the formation and behavior of clouds, the first truly scientific studies were undertaken by Luke Howard (1772 – 1864) in England and Jean-Baptiste Lamarck (1744 – 1829) in France. 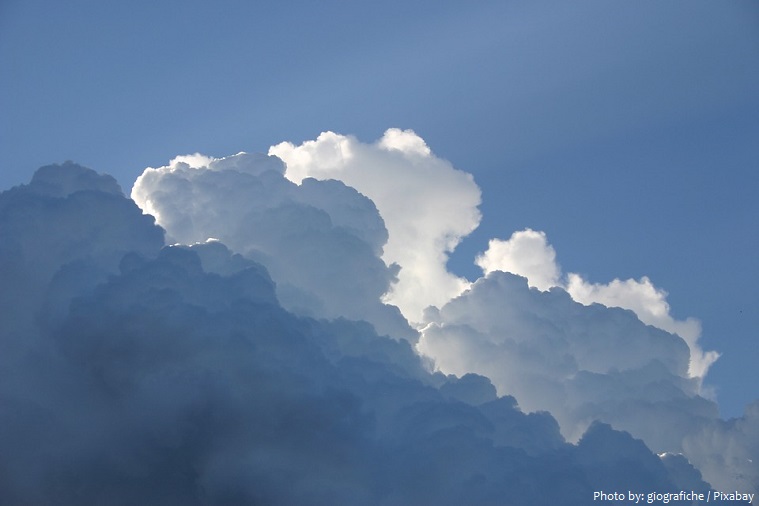 Genus types in the troposphere, the atmospheric layer closest to Earth’s surface, have Latin names due to the universal adoption of Luke Howard’s nomenclature that was formally proposed in 1802.

Developments in aviation during World War I stimulated interest in cloud formations and in their importance as an aid in short-range weather forecasting. This led to the publication of the
International Atlas of Clouds and States of Sky, in 1932 and to a revised edition in 1939.

Nephology is the science of clouds, which is undertaken in the cloud physics branch of meteorology. There are two methods of naming clouds in their respective layers of the homosphere, Latin and common.

Meteorologists classify clouds primarily by their appearance. The eight main cloud families are divided into three groups on the basis of altitude. High clouds, which are found at mean heights above the ground of 13 to 5 km (42,500 to 16,500 feet), are cirrus, cirrocumulus, and cirrostratus. Middle clouds, 7 to 2 km (23,000 to 6,500 feet), are altocumulus and altostratus. Low clouds, 2 to 0 km (6,500 to 0 feet), are stratocumulus, stratus, and nimbostratus. A cloud that extends through all three heights is called a cumulonimbus. 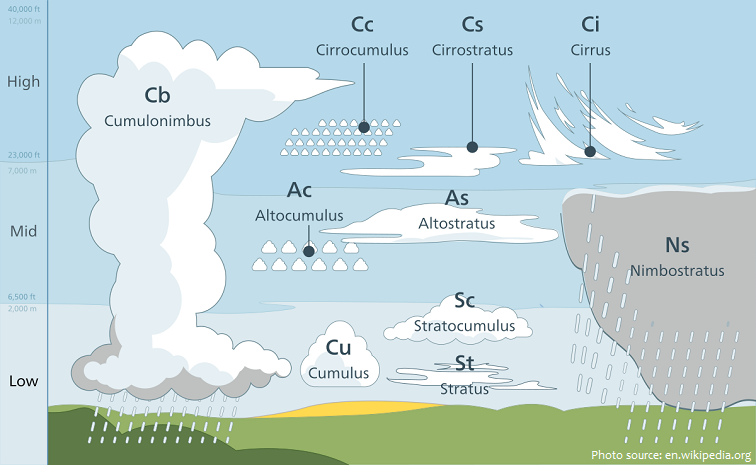 Fog is a shallow layer of cloud at or near ground level. Fog can be thin or thick, meaning people have difficulty seeing through it. It forms when the difference between air temperature and dew
point is less than 2.5 °C (4.5 °F). Fog is most likely to occur at night or near dawn when the temperature of the day is normally at it’s lowest.

Noctilucent clouds, or night shining clouds, are tenuous cloud-like phenomena in the upper atmosphere of Earth. They consist of ice crystals and are only visible during astronomical
twilight. Noctilucent roughly means “night shining” in Latin. They are the highest clouds in Earth’s atmosphere, located in the mesosphere at altitudes of around 76 to 85 km (249,000 to 279,000 feet). They are too faint to be seen in daylight, and are visible only when illuminated by sunlight from below the horizon while the lower layers of the atmosphere are in Earth’s shadow. 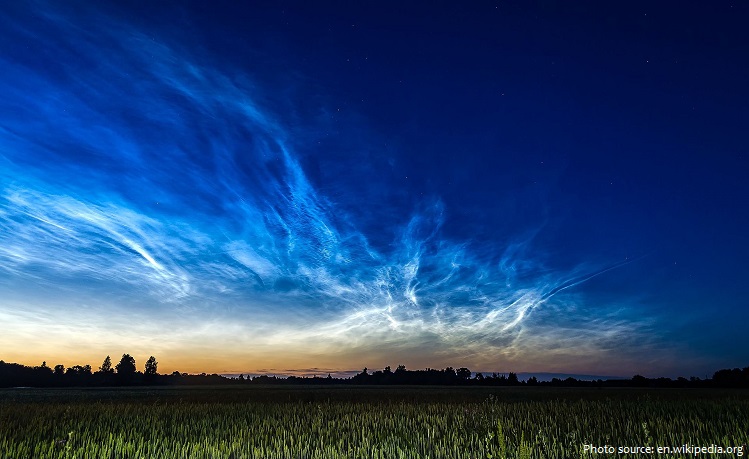 One study based on nearly a decade of satellite data estimated that about 67 percent of Earth’s surface is typically covered by clouds. This is especially the case over the oceans, where other research shows less than 10 percent of the sky is completely clear of clouds at any one time.

Cloud cover has been seen on most other planets in the Solar System.

Venus‘s thick clouds are composed of sulfur dioxide (due to volcanic activity) and appear to be almost entirely stratiform. 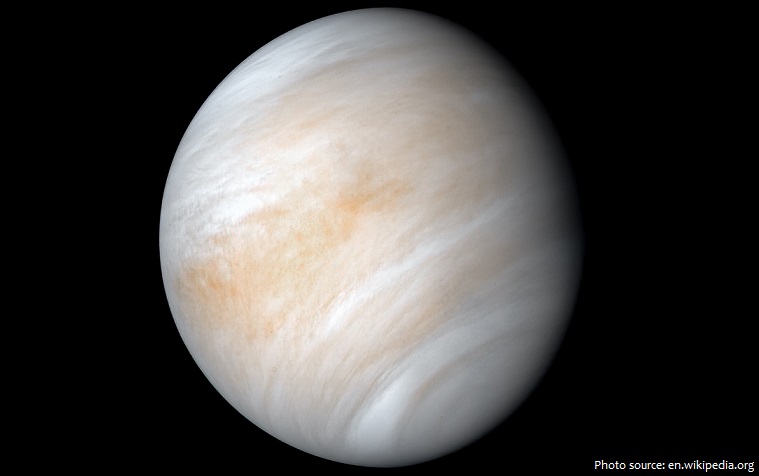 Saturn‘s moon Titan has clouds which are believed to be composed largely of droplets of liquid methane.

The origin of the term “cloud” can be found in the Old English words clud or clod, meaning a hill or a mass of rock. Around the beginning of the 13th century, the word came to be used as a metaphor for rain clouds, because of the similarity in appearance between a mass of rock and cumulus heap cloud. Over time, the metaphoric usage of the word supplanted the Old English weolcan, which had been the literal term for clouds in general. 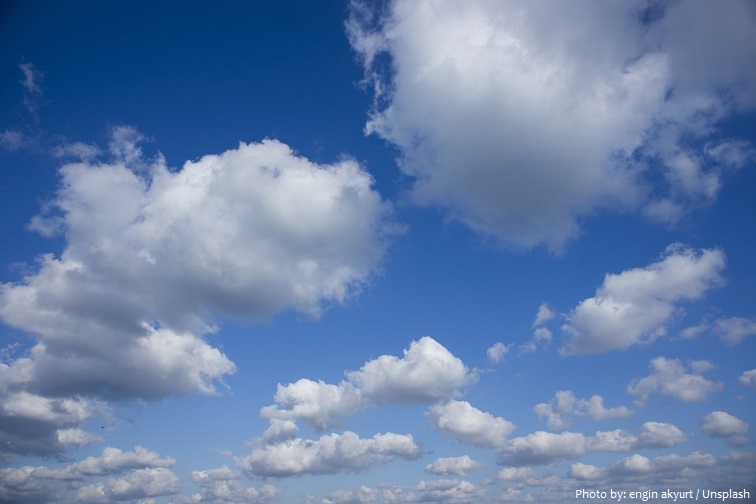 Clouds play an important role in various cultures and religious traditions. In Exodus 13:21–22, Yahweh is described as guiding the Israelites through the desert in the form of a “pillar of cloud” by day and a “pillar of fire” by night.

In China, clouds are symbols of luck and happiness. Overlapping clouds are thought to imply eternal happiness and clouds of different colors are said to indicate “multiplied blessings”. 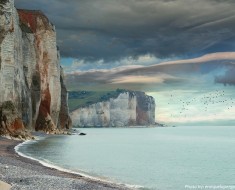 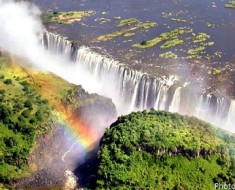 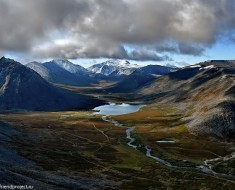 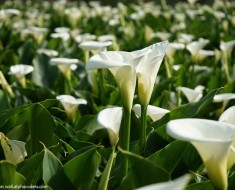 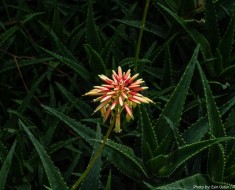 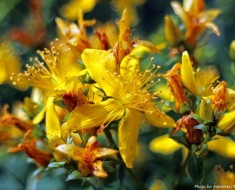