Located in the municipality of Tinum, in the Mexican state of Yucatán is the archaeological site of Chichen Itza, an ancient Maya city.

The Maya name “Chichen Itza” means “At the mouth of the well of the Itza.”

Chichen Itza was one of the largest Mayan cities and was often referred to in later literature as a mythical city.

It thrived from about 600 AD., until 1221, when the power in the region shifted to Mayapan.

Archaeologists estimate that between 900 AD and 1050 AD, this ancient city expanded and became the regions capital controlling most parts of the Central and Northern Yucatan peninsula.

The people of Chichen Itza built strong allies with regional tribes and this helped them thrive for two centuries.

There is a wide variety of architectural styles that is attributed to the fact that Chichen Itza had such diverse population and culture.

Chichen Itza may have been built where it was because of the location of two large natural sink holes nearby that would have provided water year-round.

There were no rivers or streams passing through this area.

One of these sink holes ~ Sacred Cenote ~ was thought to have been used as a place of human sacrifice. These sacrifices were made in times of drought, and men, women and children would be thrown in the well as a sacrifice to the Chac God. The Chac God is the Maya God of rain and lightning and these sacrifices were done to end drought. 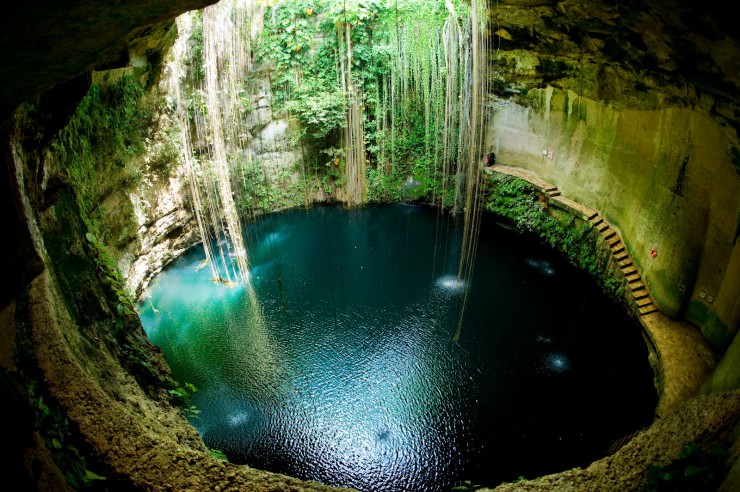 The Castillo is probably the most famous image of Chichen Itza. Castillo means castle in Spanish. The Castillo is a monument in the shape of a pyramid. This step pyramid stands about 30 metres (98 ft) high and consists of a series of nine square terraces, each approximately 2.57 metres (8.4 ft) high, with a 6-metre (20 ft) high temple upon the summit. 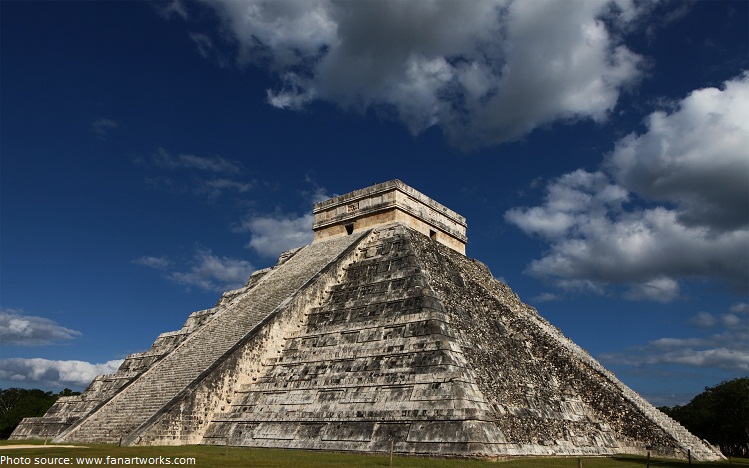 At the base of the balustrades of the northeastern staircase are carved heads of a serpent. 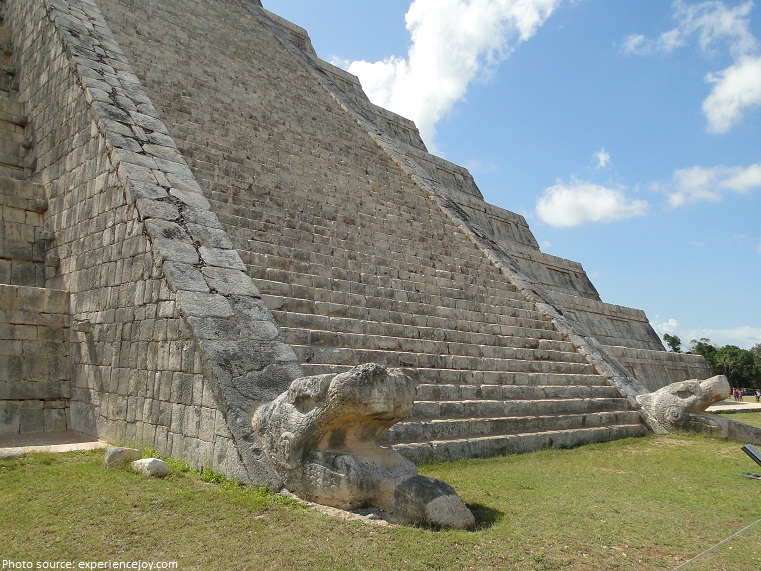 Sculptures of plumed serpents run down the sides of the northern balustrade of El castillo; During the Spring and autumn equinoxes sun strikes off the northwest corner of the monument casting a series of triangular shadows against the northwest balustrade; thus creating the illusion of a feathered serpent “crawling” down the pyramid. Millions of tourists gather to watch this phenomena.

Each of the pyramid’s four sides has 91 steps.If you include the temple platform located top as the final “step” you will get a total of 365 steps which are equal to the number of days of the Haab’ year. (The Haab’ was the Maya version of the 365-day calendar known to many of the pre-Columbian cultures of Mesoamerica.)

The Osario is another Step Pyramid very similar to El Castillo, only smaller in size. At the center of Osario is an opening that leads to a natural cave. 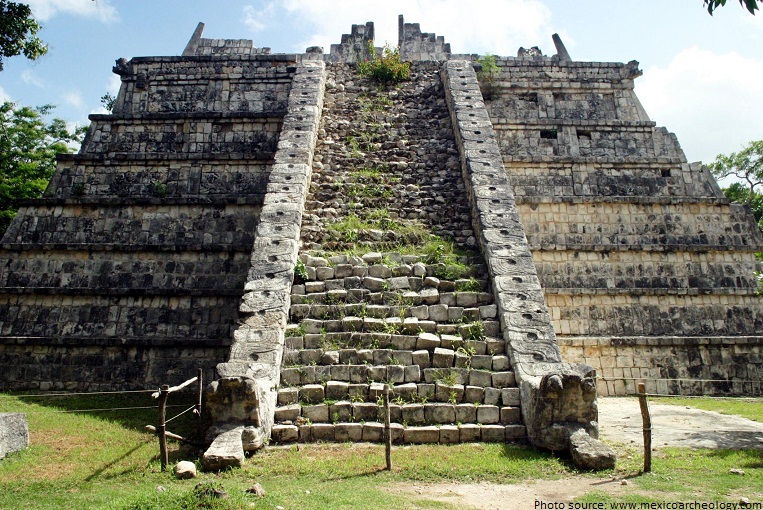 The Ball court located to the north-west of the Pyramid “El Castillo” It is the largest and best preserved ball court in ancient Mesoamerica. 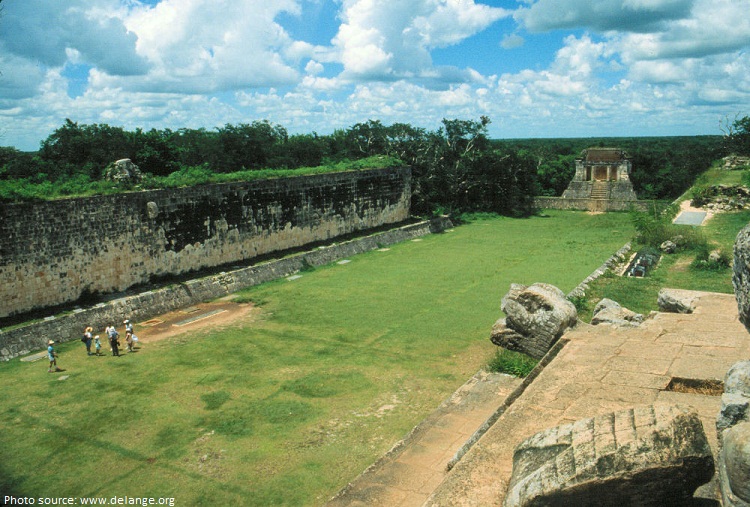 The Wall of Skulls structure at Chichén Itzá is a Toltec structure, where the heads of sacrificial victims were placed; although it was one of three platforms in the Great Plaza, it was according to Bishop Landa, the only one for this purpose–the others were for farces and comedies, showing the Itzá’s were all about fun. 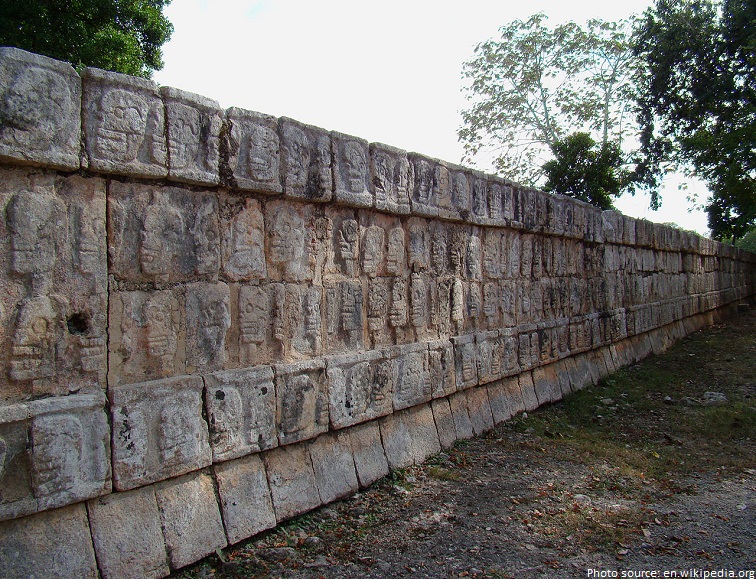 The Temple of the Warriors complex consists of a large stepped pyramid fronted and flanked by rows of carved columns depicting warriors.

Las Monjas is one of the more notable structures at Chichen Itza. It is a complex of Terminal Classic buildings constructed in the Puuc architectural style. 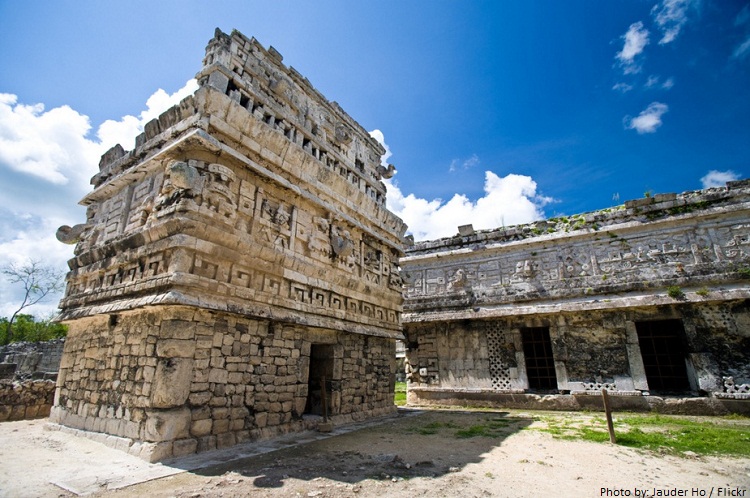 El Caracol was one of the most important temples in Chichen Itza and it is one of the most unusual ones. Archaeologists believe it served as a proto-observatory with doors and windows aligned to astronomical events, specifically around the path of Venus as it traverses the heavens.

Chichen Itza has a platform dedicated to the planet Venus located north of El Castillo. 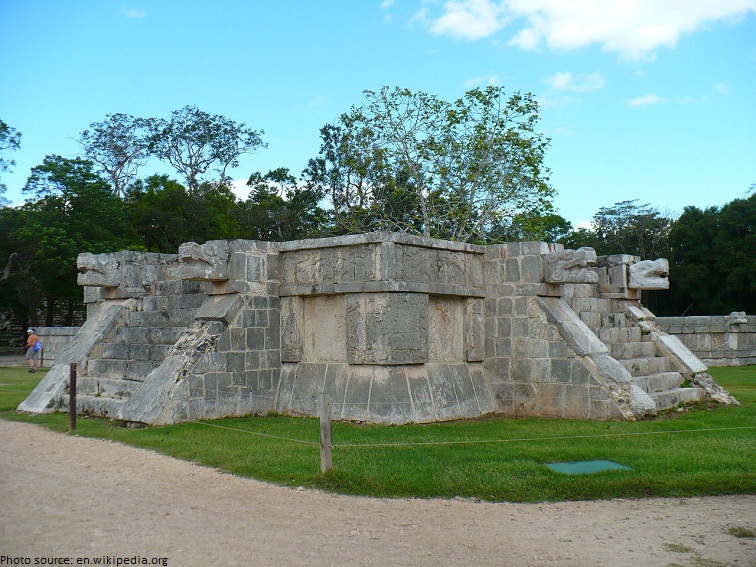 The Casa Colorada is one of the best preserved buildings at Chichen Itza that contains a Maya date inscribed correlating to 869 AD; making it one of the oldest such dates found in all of Chichen Itza. 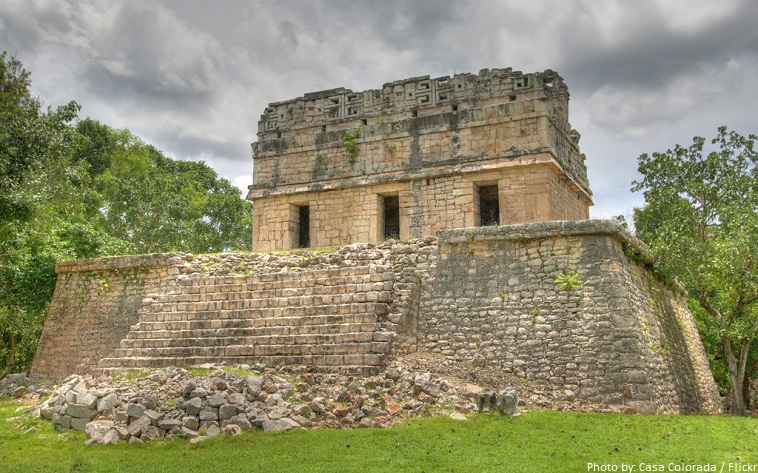 All the buildings of Chichen Itza are made from stone. It’s also thought that the Maya did no use the wheel to build any of their temples, pyramids or palaces.

Chichen Itza was abandoned by its inhabitants in the 1400s. The reason for this remains unclear; however, it is thought that droughts in the area and lack of water may have been a likely cause.

Chichen Itzu shows the skill of the Maya empire, although only ruins remain of much of Chichen Itzu now, it is clear that the ancient city was once an array of fabulous stone structures, stepped pyramids, temples and columned arcades

Chichen Itza is considered to be one the Seven Wonders of the New World.

It is also, a UNESCO World Heritage Site and the second-most visited of Mexico‘s archaeological sites.

The land where the monument of Chichen Itza is located had been privately owned until 29 March 2010, when it was purchased by the state of Yucatán.