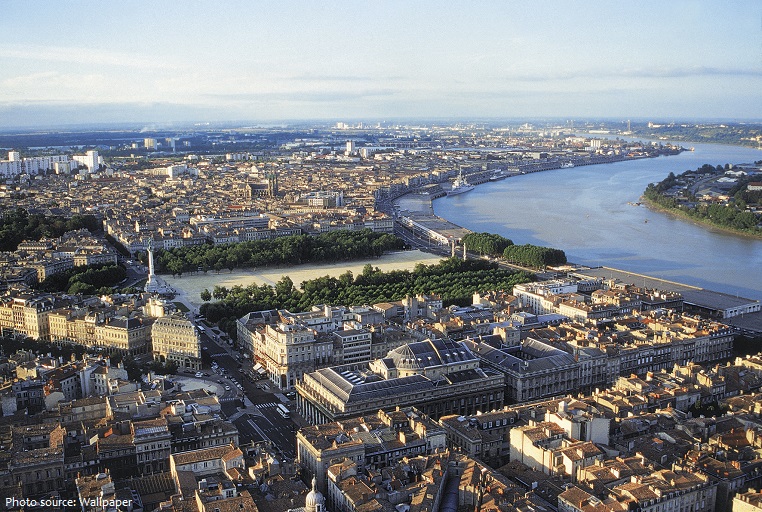 Bordeaux is a port city in Southwestern France.

It is located close to the European Atlantic coast on the Garonne river. 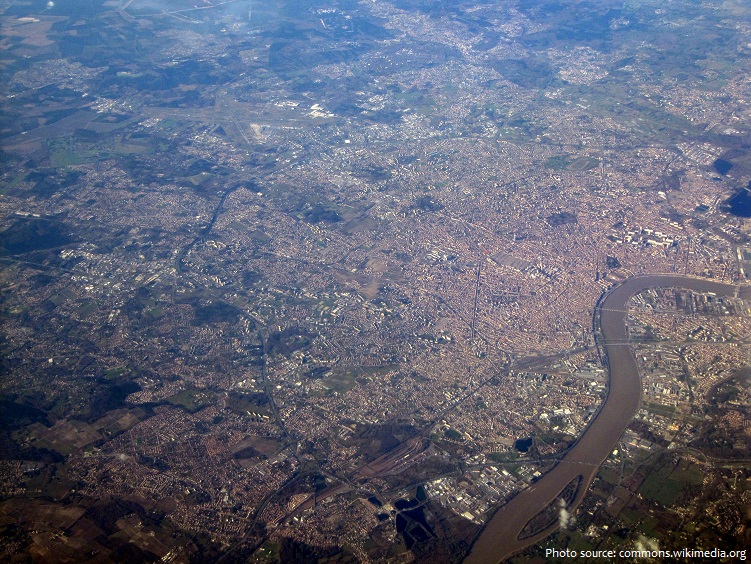 On the place where city is a settlement existed as early as the Bronze Age – and, at least since Roman times, Bordeaux has been a flourishing town and port, with connections particularly with
Spain and Britain.

As Burdigala, it was the chief town of the Bituriges Vivisci, a Celtic people.

Under the Romans it was the capital of the province of Aquitania, which extended from the Pyrenees to the Loire.

In the 4th century Burdigala, then the capital of Aquitania Secunda (one of the three parts into which the emperor Diocletian had divided Aquitania), was described by the writer Ausonius, a native of the city, as a square, walled town and one of the great educational centres of Gaul. 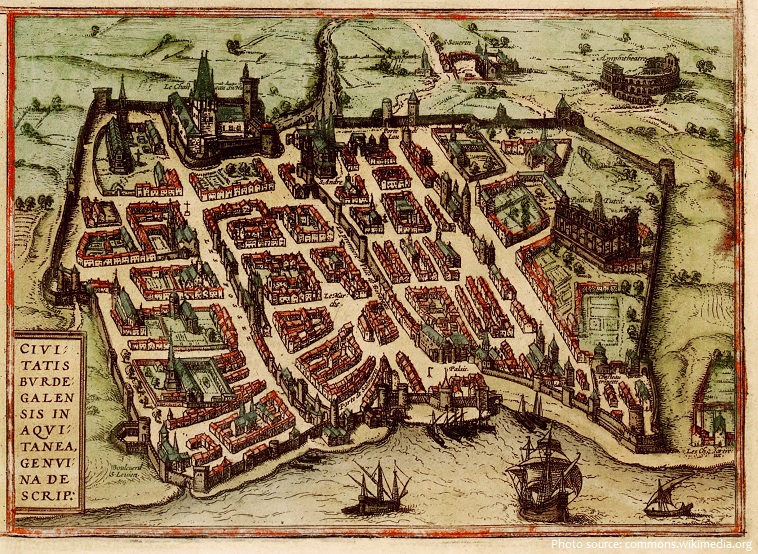 During the decline of the Roman Empire, the region around Bordeaux entered a period of political instability from which it recovered only when the dukes of Aquitaine established themselves early in the 10th century.

In 1653 Bordeaux was added to the Kingdom of France, when the army of Louis XIV entered the city.

After the coming of the railways, the great improvements to the port and the increase in trade with West Africa and South America led to increased prosperity. 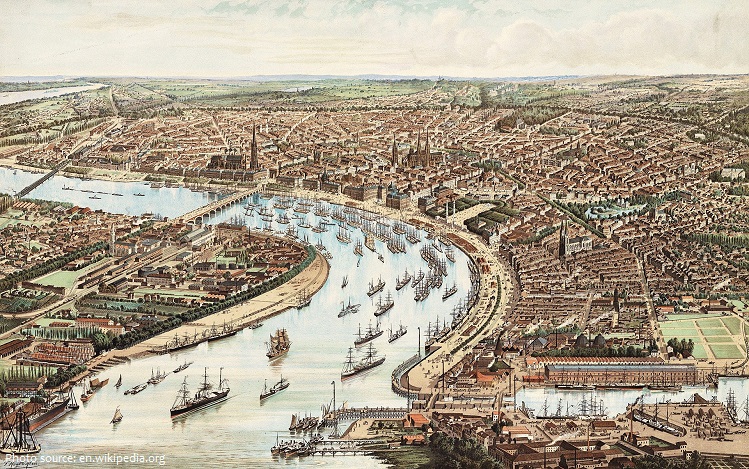 During World War II, Bordeaux fell under the German occupation.

Since 1945 Bordeaux has continued to expand – new suburbs have been built, and many of the small towns, which formerly surrounded the city, have now been incorporated within it, forming a continuous built-up area. 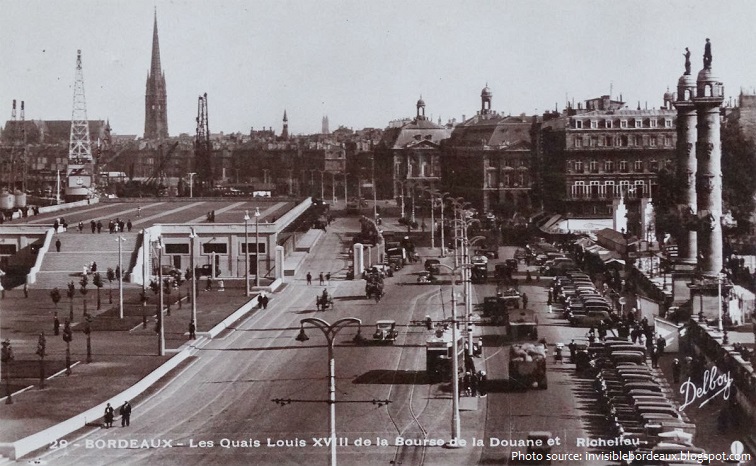 Bordeaux is classified as a “City of Art and History”. The city is home to 362 monuments historiques (only Paris has more in France) with some buildings dating back to Roman times.

Bordeaux Cathedral is a Roman Catholic church dedicated to Saint Andrew and located in Bordeaux. It is the seat of the Archbishop of Bordeaux. In 1998, UNESCO designated the Routes of Santiago de Compostela in France as a World Heritage site, including the three main churches of Bordeaux : the basilica of St. Severinus, the basilica of St Michael and the St. Andrew’s cathedral. 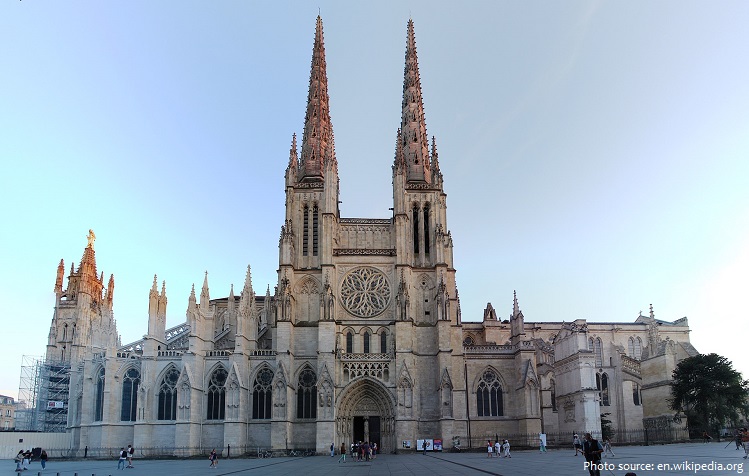 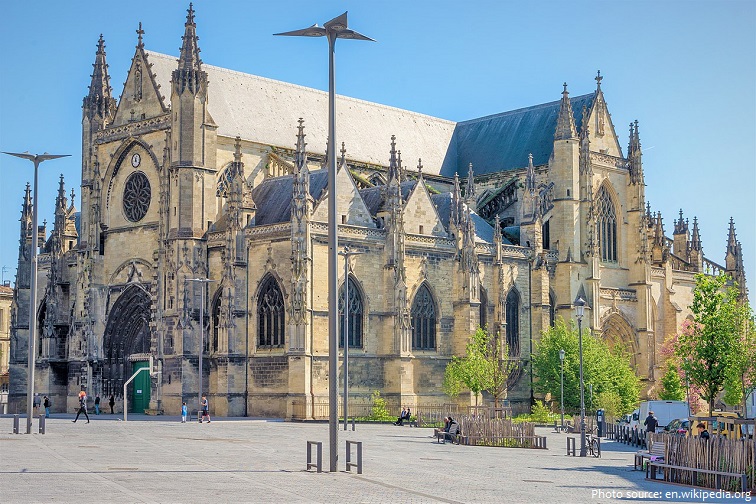 The Basilica of Saint Severinus is a church built in Bordeaux at the dawn of the 11th century. In 1998, UNESCO designated the Routes of Santiago de Compostela in France as a World Heritage site, including the three main churches of Bordeaux : the basilica of St. Severinus, the basilica of St Michael and the St. Andrew’s cathedral. 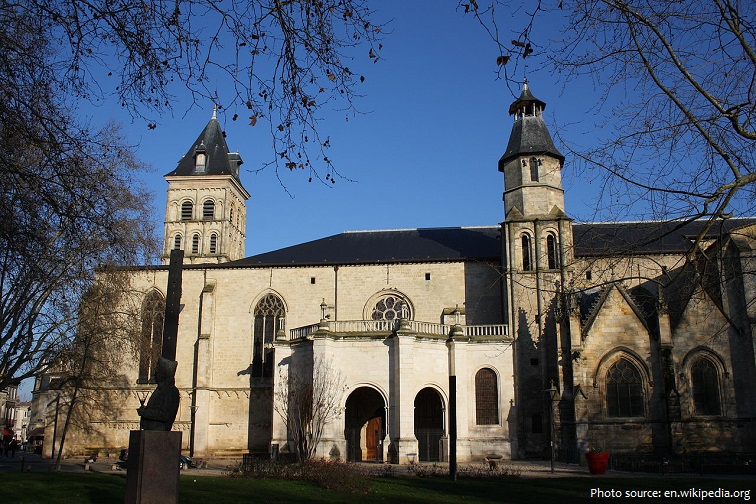 Originally Port de la Lune (Port of the Moon) is the name given to the harbour of Bordeaux since the Middle Ages, because of the shape of the river crossing the city. On the blazon of Bordeaux, a crescent represents it. So does the current logotype of the municipality, that comes from the Small Coat of Arms with three interlaced crescents. The appellation “Bordeaux, Port de la Lune” also
designates, since 2007, the 1,800 ha of the city of Bordeaux listed as UNESCO World Heritage, due to the “exceptional urban and architectural unity and coherence”. This “outstanding example of
innovative classical and neoclassical trends” is the world-largest urban area inscribed at UNESCO (40% of the city surface). 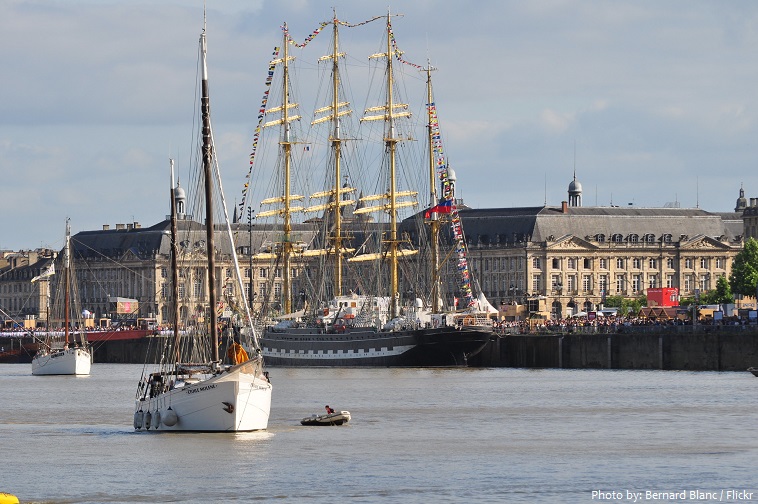 Place de la Bourse is a square in Bordeaux, and one of the city’s most recognisable sights. Built from 1730 to 1775 along the Garonne River, it was a multi-building development designed by architect Ange-Jacques Gabriel. It is within the historic part of the city that has been recognized on the UNESCO World Heritage List as “an outstanding urban and architectural ensemble” of the 18th century. 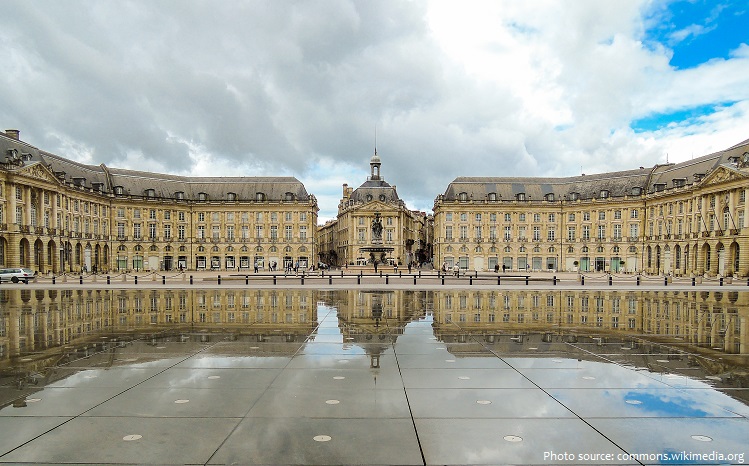 The Miroir d’eau (Water Mirror) in Bordeaux is the world’s largest reflecting pool, covering 3,450 square metres (37,100 squre feet). Located on the quay of the Garonne in front of the Place de la Bourse, it was built in 2006. The reflecting pool is made of granite slabs covered by 2 cm of water, and a system allows it to create mist every 15 minutes. 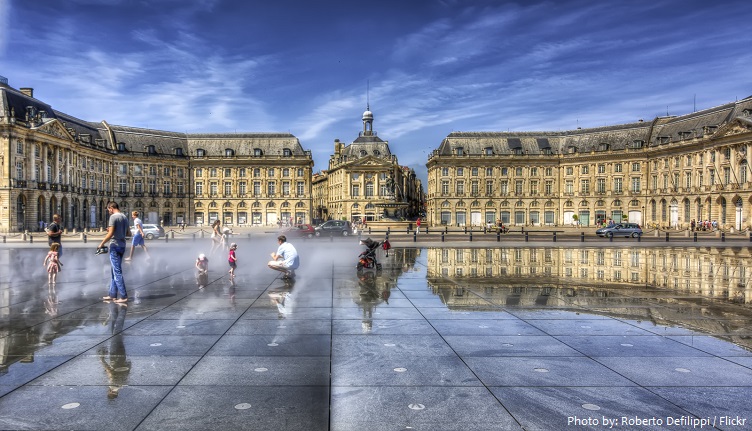 The Place des Quinconces, located in Bordeaux, is the largest city square in Europe – approximately 25.6 hectares / 63 acres. It was laid out in 1820 on the site of Château Trompette and was intended to prevent rebellion against the city. Its guns were turned towards the centre. Its current shape (lengthened rectangle rounded off with a semicircle) was adopted in 1816. Trees were planted (in quincunxes, hence the name of the square) in 1818. 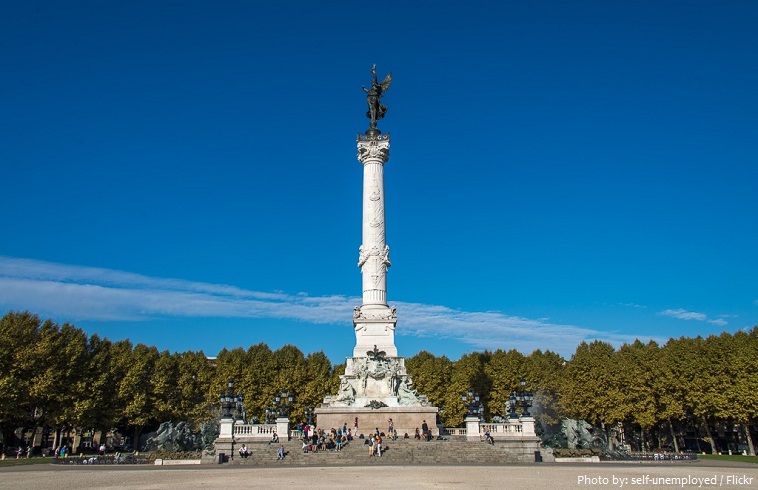 The Grand Théâtre de Bordeaux is an opera house in Bordeaux, first inaugurated on 17 April 1780. It was in this theatre that the ballet La fille mal gardée premiered in 1789, and where a young Marius Petipa staged some of his first ballets.

The Cité du Vin is a museum as well as a place of exhibitions, shows, movie projections and academic seminars on the theme of wine located in Bordeaux.

Bordeaux is home to the world’s main wine fair, Vinexpo, and the wine economy in the metro area takes in about 15 billion euros each year.

The history of Bordeaux wine spans almost 2000 years to Roman times when the first vineyards were planted. In the Middle Ages, the marriage of Henry Plantagenet and Eleanor of Aquitaine opened the Bordeaux region to the English market and eventually to the world’s stage. The Gironde estuary and its tributaries, the Garonne and the Dordogne rivers play a pivotal role in the history and success of this region.

The city is the first city in France to have created, in the 1980s, an architecture exhibition and research centre, Arc en rêve. 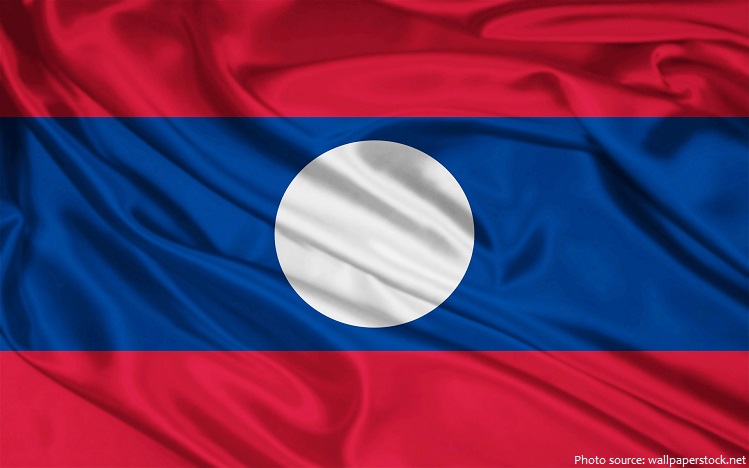 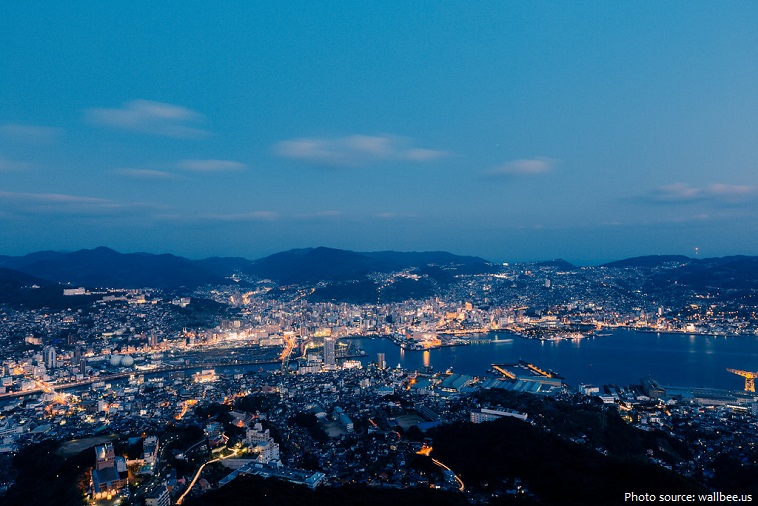 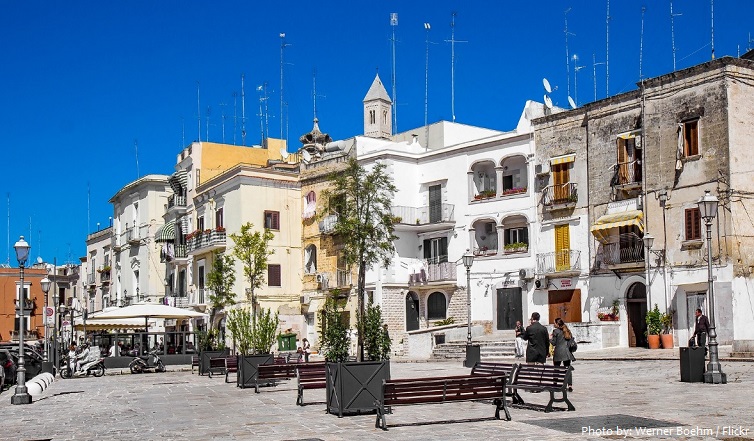 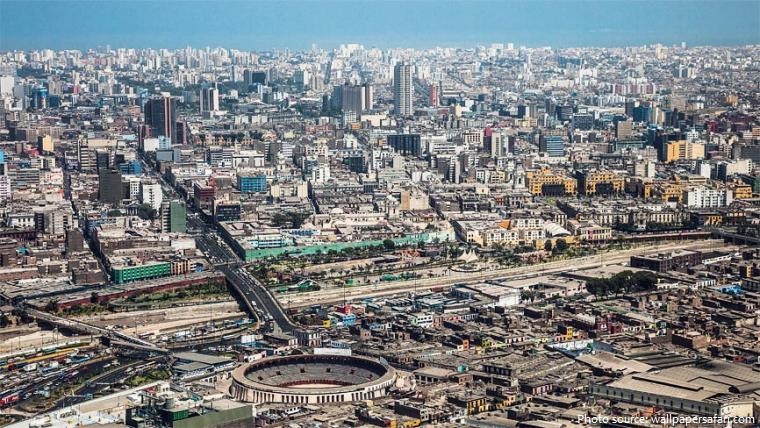 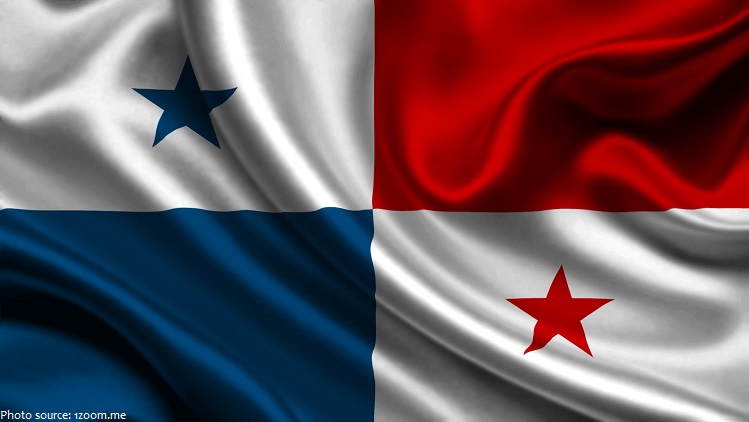 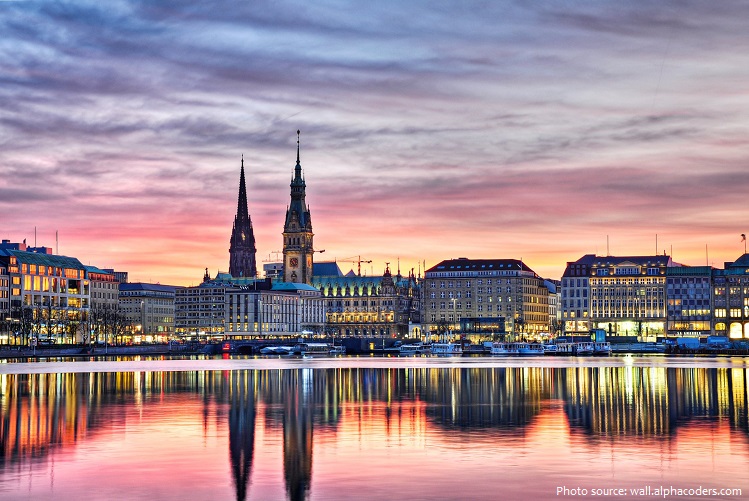