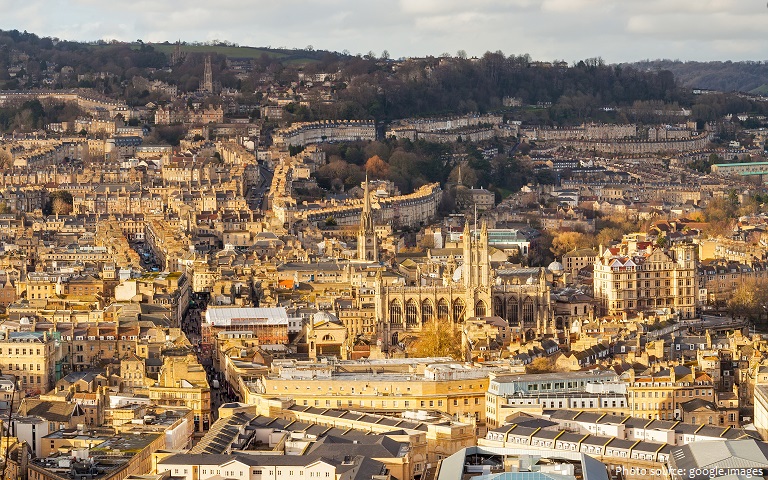 Bath is the largest city in the county of Somerset, England.

It is known for and named after its Roman-built baths.

The city is situated astride the River Avon in a natural arena of steep hills. 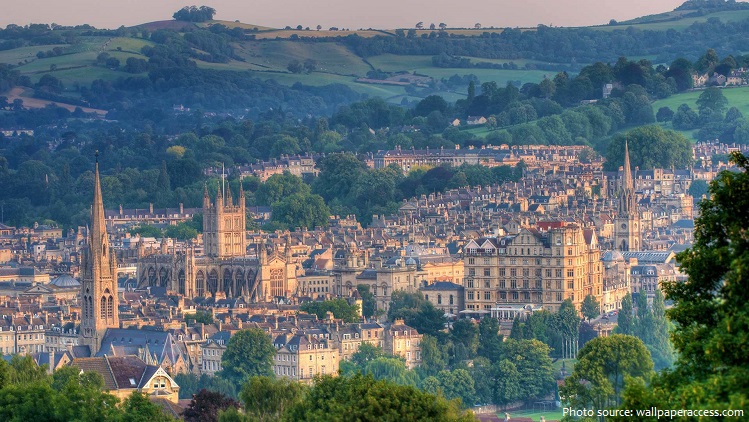 Founded by the Romans as a thermal spa, Bath became an important centre of the wool industry in the Middle Ages.

Bath was built of local limestone and is one of the most elegant and architecturally distinguished of British cities.

Now the largest city in the county of Somerset, Bath was granted city status in 1590 by Queen Elizabeth I. 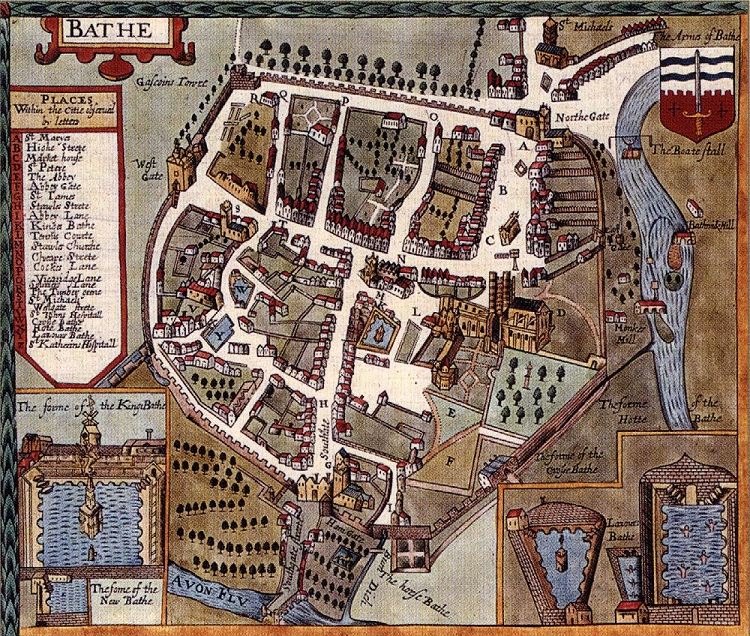 In the 18th century, under George III, it developed into an elegant town with neoclassical Palladian buildings, which blend harmoniously with the Roman baths.

Many of the streets and squares were laid out by John Wood, the Elder, and in the 18th century the city became fashionable and the population grew.

Jane Austen lived in Bath in the early 19th century. 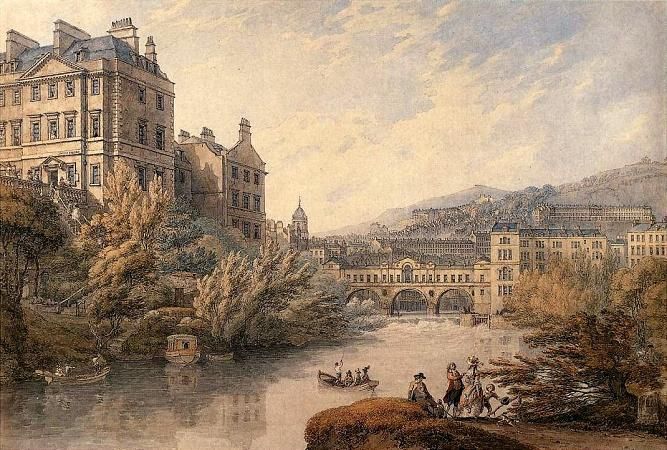 The city became a World Heritage site in 1987.

The Roman Baths are a well-preserved thermae in the city of Bath. A temple was constructed on the site between 60-70 AD in the first few decades of Roman Britain. Its presence led to the development of the small Roman urban settlement known as Aquae Sulis around the site. The Roman baths—designed for public bathing—were used until the end of Roman rule in Britain in the 5th Century AD. According to the Anglo-Saxon Chronicle, the original Roman baths were in ruins a century later. The area around the natural springs was redeveloped several times during the Early and Late Middle Ages. 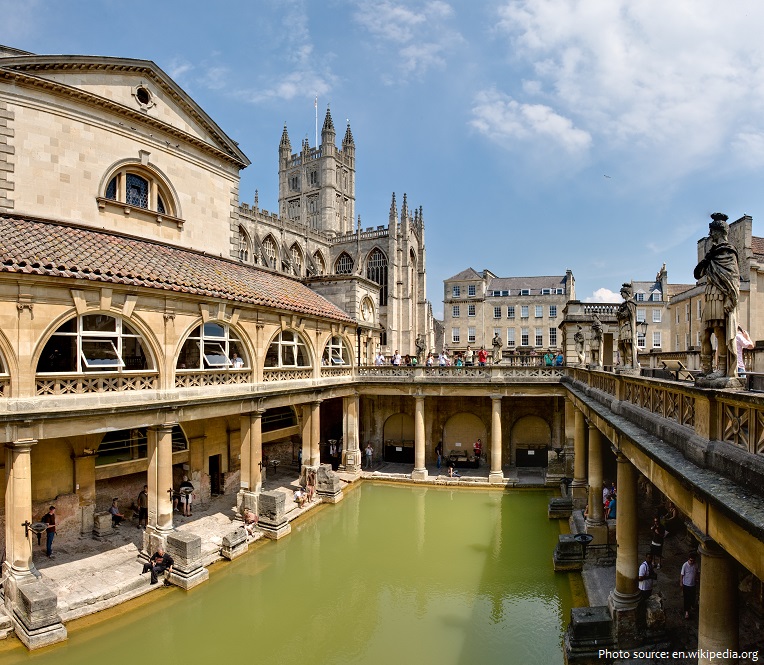 Bath Abbey is a parish church of the Church of England and former Benedictine monastery in Bath. Founded in the 7th century, it was reorganised in the 10th century and rebuilt in the 12th and 16th centuries – major restoration work was carried out by Sir George Gilbert Scott in the 1860s. It is one of the largest examples of Perpendicular Gothic architecture in the West Country. The medieval abbey church served as a sometime cathedral of a bishop. After long contention between churchmen in Bath and Wells the seat of the Diocese of Bath and Wells was later consolidated at Wells Cathedral. The Benedictine community was dissolved in 1539 during the Dissolution of the Monasteries. 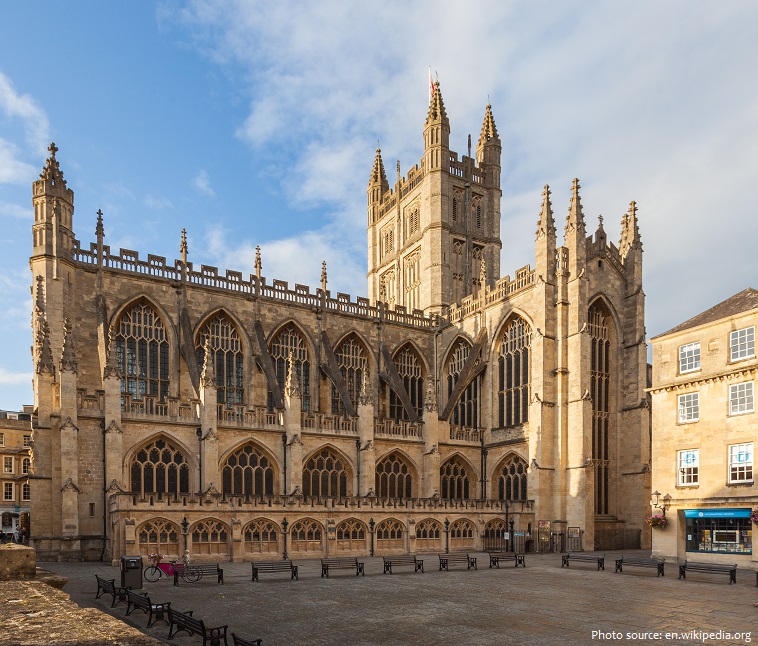 Pulteney Bridge crosses the River Avon in Bath. It was completed by 1774, and connected the city with the land of the Pulteney family which they wished to develop. Designed by Robert Adam in a Palladian style, it is exceptional in having shops built across its full span on both sides. It has been designated as a Grade I listed building. The bridge is now 45 metres (148 ft) long and 18 metres (58 ft) wide. 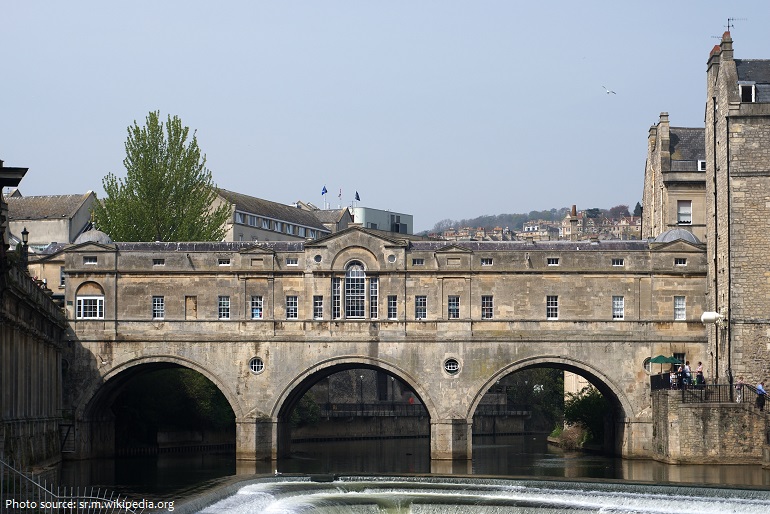 The Jane Austen Centre at 40 Gay Street in Bath is a permanent exhibition which tells the story of Jane Austen’s Bath experience – the effect that visiting and living in the city had on her and her writing. The building is part of a block (31–40 Gay Street) which has been designated by English Heritage as a Grade II listed building. 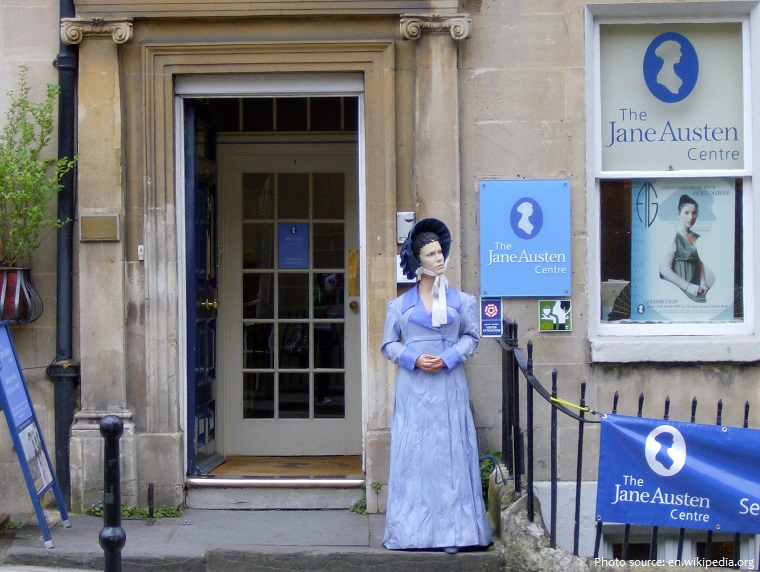 Royal Victoria Park is located in Bath, England. It was opened in 1830 by the 11-year-old Princess Victoria seven years before her ascension to the throne and was the first park to carry her name, with an obelisk dedicated to her. It was privately run as part of the Victorian public park movement until 1921 when it was taken over by the Bath Corporation. 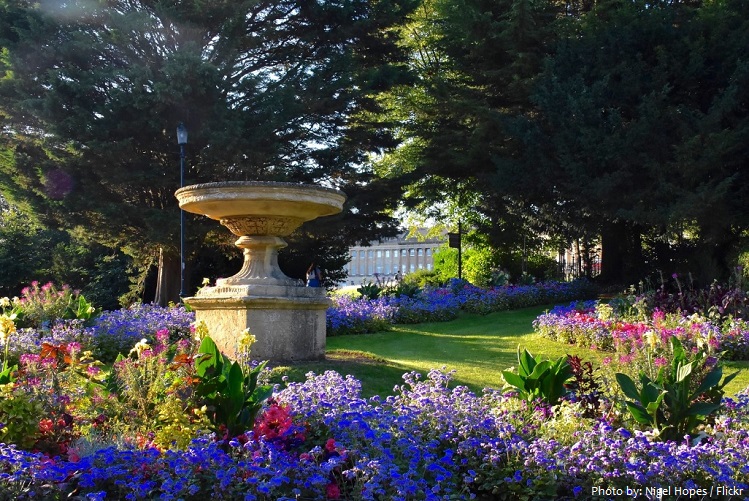 The Fashion Museum is housed in the Assembly Rooms in Bath. The collection was started by Doris Langley Moore, who gave her collection to the city of Bath in 1963. It focuses on fashionable dress for men, women and children from the late 16th century to the present day and has more than 100,000 objects. The earliest pieces are embroidered shirts and gloves from about 1600. The Museum receives about 130,000 visitors a year including tourists, fashion specialists, students and locals of the area. 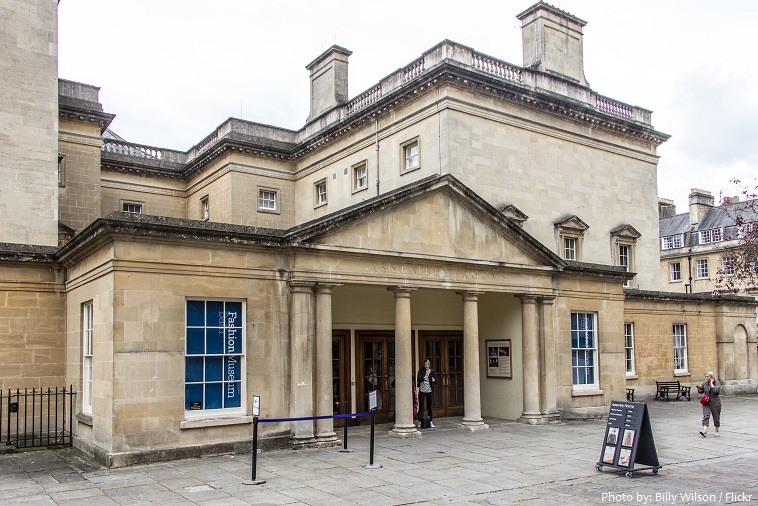 The Victoria Art Gallery is a public art museum in Bath. It was opened in 1900 to commemorate Queen Victoria’s diamond jubilee. It is a Grade II* listed building and houses over 1500 objects of art including a collection of oil paintings from British artists dating from 1700 onwards. The ground floor was at one time a public library. 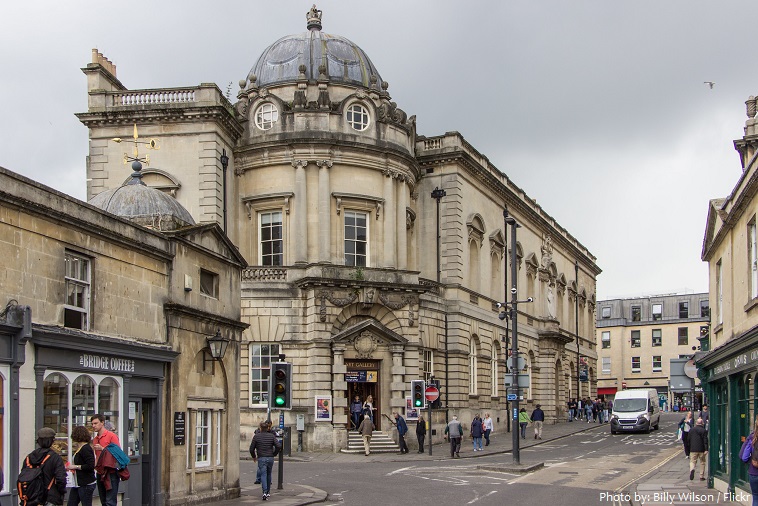 The Royal Crescent is a row of 30 terraced houses laid out in a sweeping crescent in the city of Bath. Designed by the architect John Wood, the Younger and built between 1767 and 1774, it is among the greatest examples of Georgian architecture to be found in the United Kingdom and is a Grade I listed building. Although some changes have been made to the various interiors over the years, the Georgian stone facade remains much as it was when first built. 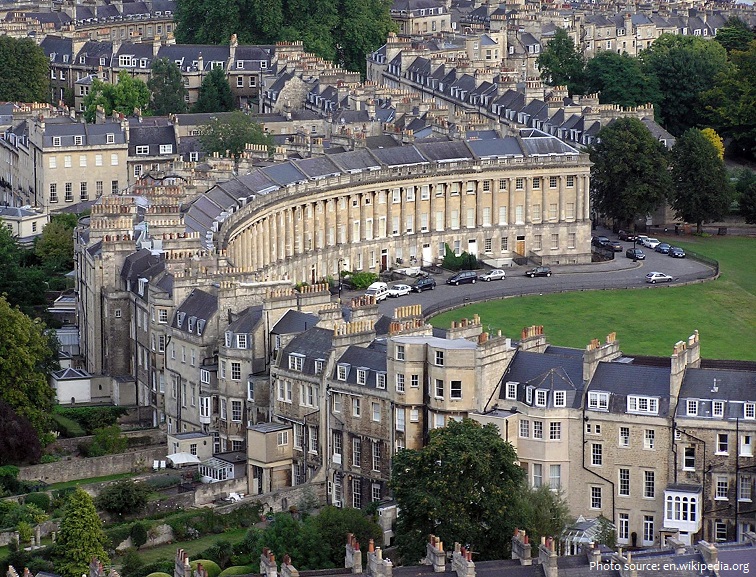 A charming location, Bath is consistently ranked among the best cities in the UK to live, work and visit.

Bath may have been the site of the Battle of Badon (c.500 AD ), in which King Arthur is said to have defeated the Anglo-Saxons.

Bath Rugby is a rugby union team in the Premiership league. 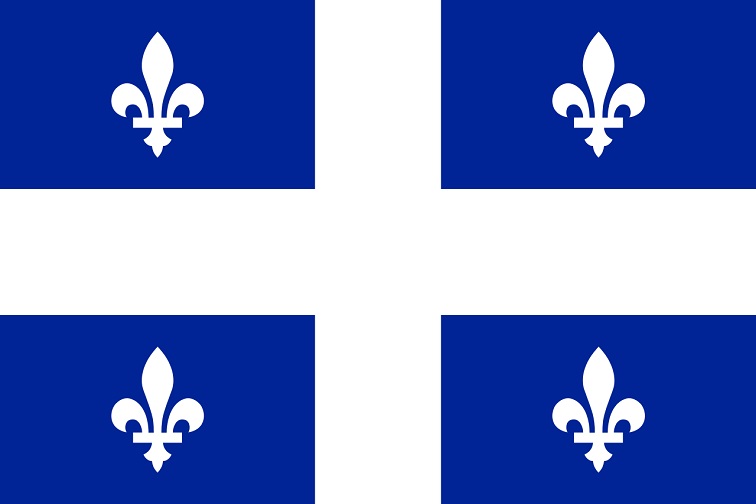 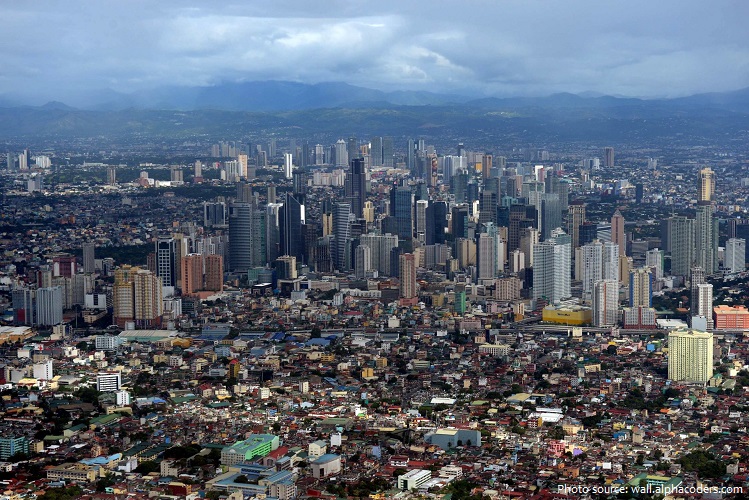